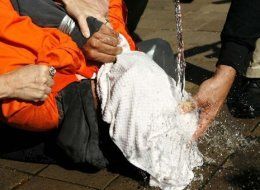 It remains to be seen whether former President George W. Bush was correct when he asserted that history would vindicate his decision to invade Iraq. It’s going to be many years before History makes up its mind on that one. Recent history, however, is not looking favorably on how the press conducted itself during the Iraq war years, particularly on the subject of torture.

The Kennedy School of Government at Harvard has released a damning new report which, in the words of Glenn Greenwald “provides the latest evidence of how thoroughly devoted the American establishment media is to amplifying and serving (rather than checking) government officials.” It is not pretty.

Essentially once America started doing it, the American free press stopped calling it torture. Jason Linkins wonders if the press was concerned about losing access. Will Bunch at the Philadelphia Daily News says:

The study proves scientifically something we’ve been talking about here at Attytood since Day One, about the tragic consequences of the elevation of an unnatural notion of objectivity in which newspapers abandoned any core human values — even when it comes to something as clear cut as torture — to give equal moral weight to both sides of an not-so-debatable issue.

It’s an observation which somewhat tenuously brings to mind the Dave Weigel flap from last week — Weigel was fired over concerns regarding objectivity…as in his journalistic objectivity had been compromised by the leaked Journalist emails since presumably reporters are not allowed to hold opinions on anything. It also brings to mind much of the uproar over Michael Hastings‘ McChrystal Rolling Stone article; Hastings was accused by Lara Logan of essentially being unpatriotic when he reported remarks made by McChrystal that resulted in his firing. The sense from Logan at least, was that as a responsible reporter Hastings should have protected McChrystal from himself.

Will Bunch thinks the report highlights a larger problem, namely the country has lost it’s ability to “distinguish right from wrong on its most basic level, because of our need to filter everything through some kind of bogus political prism.”

As I said, the report is not pretty. I have to wonder, however how or if any of this might have been altered had social media played a large role in journalism in 2004. I don’t want to afford Twitter or Facebook more power than they deserve, but one main conclusion to be drawn from this report is that language still matters. A lot. And while many media figures bemoan the cacophony that has accompanied the deluge of people contributing to the conversation via all these new online platforms one thing it has unquestionably accomplished is that it has taken the power of language out of the hands of the few and handed it over to the hand of the many. Something this report makes clear is not a bad thing.

You can read the full report in PDF here.