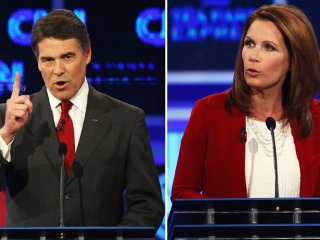 One takeaway from this week’s GOP debate, co-sponsored by CNN and Tea Party Express, is that Texas Governor Rick Perry — who had, it seemed, been lumped together with Michele Bachmann in terms of catering particularly to the sort of religious, very socially conservative segment of the party’s primary voters — differs greatly from Bachmann, if not the other candidates in general, when it comes to a few rather contentious issues. Earlier today, we took a look at how Perry’s attitude towards and legislation concerning the children of illegal immigrants sets him apart from many his colleagues. Perry always raised eyebrows for his stance on the HPV vaccine.

In 2007, Perry signed an executive order requiring girls in Texas to receive an HPV vaccine before entering the sixth grade. Presumably, the measure would prevent transmission of the human papillomavirus, a sexually transmitted infection which, in some, can cause cervical cancer. Perry — in a move that may come as a surprise to some given his recent comments questioning the science behind global warming and evolution — made sure to reference the scientific research into the infection and the vaccine when crafting the preamble to his order. The order also gives parents who do not wish for their children vaccinated the option of downloading and signing paperwork voicing their “conscientious objection” to the vaccine. Nonetheless, the order was met with disapproval from members of the religious right who were made uneasy or angry by the idea that pre-teens were being vaccinated against a sexually transmitted virus.

Through it all, Perry had steadfastly defended his decision, asking his critics to think of their “daughters and granddaughters” and how they would benefit from what the world of medicine has to offer. All the same, the order was eventually nullified.

The New Yorker has published a worthwhile read on what defending that order has meant for Perry, and what it still means for him today as he looks towards the White House. The article makes special note of Bachmann’s reaction during the debate, where she reminded viewers that she is the mother of three girls (And, thus, has greater insight into the medical research concerning the health of young females?) and dealt Perry a heavy blow by essentially accusing him of being in the pocket of pharmaceutical companies:

The article ends with some sage advice for Perry (and, indeed, for any candidate who aims to look like a strong leader, and a person of firm convictions):

Considering the problems we face, Perry’s handling of the HPV vaccine as governor seems like a trivial issue, but it is custom made for the kind of misinformed, conspiratorial, and damaging attacks that someone like Bachmann has made a career out of demagoguing. Perry’s response last night was weak and contradictory. He said his executive order was a “mistake” but also tried to defend it, noting “cervical cancer is a horrible way to die.” If Perry does not take control of the issue, it could threaten his candidacy.

Perhaps Perry truly believes it was a mistake. But if he’s trying to “win back” the religious right from Bachmann, he may do well to focus his sights instead on the party as a whole, as well as on Independent voters and disgruntled moderates (of which there are multitudes) looking for a leader with strong backbone — voters who will most likely find themselves alienated by a candidate that focuses solely on the Republican base, or who are left cold by a candidate who consistently turns to religion when forming legislation.

Ultimately, of course, Gardasil isn’t going to be a make-or-break issue for any candidate. But it’s guaranteed voters will remember which candidates seem to fold or retreat under pressure, regardless of the issue at hand.