NFL Player Twitter Rant On Players Coming Out While In the League: ‘Selfish’ And ‘Should Be Left At Home’
Twitter

NFL Player Twitter Rant On Players Coming Out While In the League: ‘Selfish’ And ‘Should Be Left At Home’ 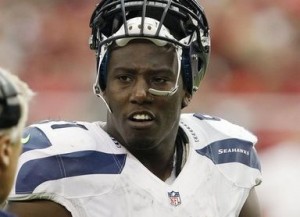 The gay rights debate has been front and center this week as DOMA and California’s Proposition 8 law reached the U.S. Supreme Court, and Seattle Seahawks defensive end Chris Clemons took notice with a series of tweets earlier in the week. Clemons stirred a controversy after saying it would be a bad idea for an NFL player to come out of the closet while playing in the league.

Who on Gods earth is this person saying he’s coming out of the closet in the NFL?

Responding to a tweet asking him to clear up if he was against players coming out entirely or against them waiting to do it until they’re in the NFL, Clemons walked things back.

@jack_humphreys4 I’m not against anyone but I think it’s a selfish act.They just trying to make themselves bigger than the team. — Christopher Clemons (@chrisclemons91) March 26, 2013

Clemons final tweet made clear that he was not homophobic:

@hbonynge No one said anything about be a homophobic.I just think something’s should be left at home.

Clemons comments come on the heels of a report by CBS Sport’s Mike Freeman that says a currently gay NFL player is considering coming out in the next few months while attempting to also continuing his career. If and when this happens, it would mark the first ever actively gay NFL player in the league’s close to 100-year history.

There were also pro-gay rights players speaking out loudly this week, as Linebacker Brendon Ayanbadejo of the Super Bowl Champion Baltimore Ravens made the cable news rounds advocating for same sex marriage. Ayanbadjego, who is not gay, told CNN’s Carol Costello “just talking about it in NFL locker rooms, there’s been a huge change there.” He added,”We’re behind society as a whole in the NFL locker room and society is way ahead of us.”