Nike Finally Got On That ‘Self-Tying Shoes’ Thing 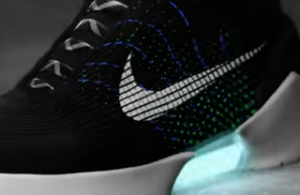 Every time one of the dates highlighted in the Back to the Future movies rolls around, people love to complain that we haven’t advanced as far as they’d hoped we would based on a totally made-up film franchise. From flying cars to food hydrators, nothing is good enough for a generation of people walking around with the Internet quite literally in their pockets and on their wrists. Well, it’s time to stop whining, folks, because Nike finally gave up and made some of the self-lacing shoes that Marty McFly made look so darn cool three decades ago.

Here is a real, live person who actually exists trying them on. His name is Darren Rovell. He is neither a known time traveler or nostalgic cynic.

I try on Nike’s first power lacing shoe, which will be available later this yearhttps://t.co/7QJIj5tXBR

Here is the official video from Nike:

When you step in, your heel will hit a sensor and the system will automatically tighten. Then there are two buttons on the side to tighten and loosen. You can adjust it until it’s perfect.

The benefits of this shoe outweigh simple bragging rights (although that is definitely a hefty component in the decision to purchase self-lacing shoes, surely) and include a more customized fit and a more reliable fit for athletes, which is safe, convenient, and performance-enhancing.

Expect these to hit stores around the holiday season this year, according to their official site. Keep waiting on the food hydrator or, you know, don’t.