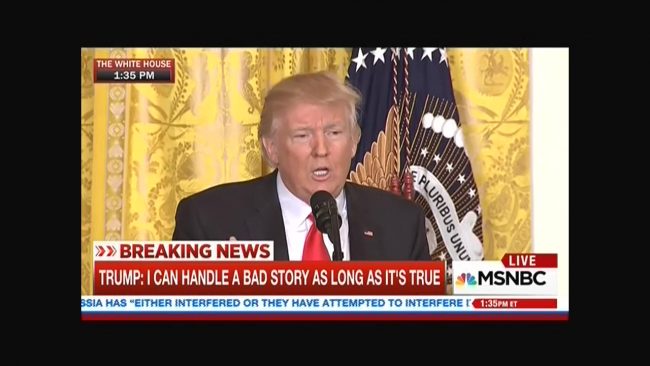 We all know by now that the era of President Trump means we have officially left the gravitational pull of the rational earth and all the old rules are just a distant memory. However, even with this new standard by which all events will be evaluated, Trump’s address/press conference today was completely surreal and totally insane.

Here are my top ten takeways regarding all of the many elements of it which, in any other prior administration, would have been headline stories, but which will likely get lost amid the chaos created by this tornado of “Trumpsanity.”

#1 — Trump’s opening remarks, during which he was extremely subdued, felt like he was using the event as a self-indulgent therapy session in order to deal with all of the negative press that the awful start to his presidency has generated. His friends (if he has any real ones) and family should be concerned about him.

#2 — His blatant lie that his Electoral College win was the biggest since Reagan’s (FIVE others since then, including George H.W. Bush’s were larger) was simply scary. We now have a president who just says crap because he wants to believe it, even when any decent high school social studies student or anyone with access to Google, would know that it was obviously false. Even when informed of this during the questions, Trump still didn’t seem to accept he was wrong, or think that it was a big deal even if he was.

#3 — While lambasting the 9th Circuit Court of Appeals (of which I am no fan) for their decision on his “travel ban,” Trump claimed that they have been overturned “80% of the time.” He then absurdly said that this was “just a number I heard,” which means I didn’t even have to look it up to know that was also probably bullcrap (as it turns out, Trump clearly got this very deceiving number from watching Fox News).

#4 — While many of the questions dealt with the resignation of former National Security Advisor Mike Flynn, we still don’t have any solid answers on what actually happened or a logical scenario to explain it all. Trump did say that he didn’t ask Flynn to speak to Russia about the U.S. sanctions but that he would have if he hadn’t (huh?!). No one pinned him down however on the critical question of when exactly he knew Flynn had spoken to the Russians about this and then lied about it to Vice President Mike Pence. Trump’s view of Flynn as a terrific guy who was railroaded by the news media just doesn’t make sense while he also admits he asked for his resignation because he wasn’t truthful with Pence. Especially when it’s clear Trump knew about this for weeks before he effectively fired him.

#5 — Trump appears not to realize that he is no longer running against Hillary Clinton and that she has no power at all to stop him from doing whatever he wants. He once again created the grossly inaccurate impression that Hillary had been given questions to their debates (it was for Democratic town hall events), seemingly because he is still smarting from having lost to her in those contests. He also laughably claimed that if he ever got questions for a debate, he would get the death penalty from the media. But according to Megyn Kelly’s book he may have been leaked the critical first question to the very vital first GOP debate and that has not gotten nearly the coverage that it deserves.

#6 — It probably won’t get much attention, but in a side comment during his confrontation with a CNN reporter, Trump strongly implied that he had gotten that network’s boss, Jeff Zucker, a family friend, his job there, which is lunacy which CNN has already debunked. The self-delusion and narcissism in this president seems to know no bounds.

#7 — It is now clear to me that Trump’s real desire in life is to own a TV network and host his own program critiquing the news media. I actually think it would be a really good show. I would be happy to donate to the cause of making that happen. Heck, I would even be happy to help produce it.

#8 — Perhaps most stunning of all, though my guess is that it is so crazy that it will be largely ignored, Trump said that the “greatest thing” he could do politically would be to blow up a Russian submarine just off the coast of the United States (thus starting World War III). Thankfully, we can all rest easily because he said he currently doesn’t think he will do that.

#9 — Trump’s fans will of course love this performance, all while he has still done very little, if anything, about their key issues. This was the equivalent of a Roman Emperor throwing some prisoners to the lions in the Coliseum as a distraction for the public’s amusement. This circus will buy him some more time with his base (especially as his sycophants in the formerly “conservative” media desperately trot out this phony narrative that Trump is being undermined by a “shadow Obama government”), but I doubt he has the discipline to properly take advantage of that.

#10 — Immediately after the “press conference” ended, CNN’s Wolf Blitzer’s first word was “Wow!” Today, we were all Wolf Blitzer.
John Ziegler hosts a weekly podcast focusing on news media issues and is documentary filmmaker. You can follow him on Twitter at @ZigManFreud  or email him at johnz@mediaite.com