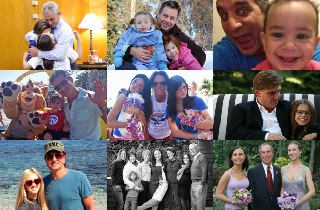 I believe it was MC Skat Kat who once observed the nullifying properties of taking equal numbers of forward and backward steps, properties which were on display in the media this Father’s Day. While Google took the leap to include a black dad in its Father’s Day doodle for the first time, Time Magazine asked a bunch of “famous dads” to write open letters to their daughters, as part of a “Letters From Dad” collection for Father’s Day. Apparently, they couldn’t find a single black father to participate, perhaps because the only one they knew was busy posing for Google’s doodle?

The Maynard Institute’s Richard Prince (of Journal-isms™ fame) and Tampa Bay Times media critic Eric Deggans noted the omission on Twitter, with Deggans pointedly tweeting “Wow. When TIME magazine asked several famous dads to write Father’s Day letters, they forgot to inlcude black men,” and observing that even if obvious choices like Bill Cosby or Will Smith had hypothetically turned the magazine down, “Are those the only famous black fathers TIME knows? Larry Fishburne had a movie opening this past weekend.”

Still, it’s possible that Time’s list was culled from such a narrow definition of “famous” that it just didn’t leave them many possibilities. Which celebrity supernovas made the cut?

Wait, so you mean to tell me that Time couldn’t find a black father more famous than Bruce Jenner and Richie Sambora? Doesn’t Sinbad have kids? And who the eff is Michael Buckley?

Instead, Time‘s readers were treated to homemade slices of American pie like this, from broadcasting legend Tom Brokaw:

Sarah, we’ll always have that New Year’s eve where I encountered your boyfriend walking through our house, drinking my precious magnum of Dom Perignon straight from the bottle.

Yeah, we’ve all been there. I’ll never forget the time my kids completely depleted the supply of Grey Poupon my driver keeps in the console, or the time they filled my Bentley with unleaded regular. Regular!

There’s every chance that an open letter from a rich black celebrity would be similar to Brokaw’s, or others’, letters, but that’s the point. We’ll have to wait until next year to maybe find out. I can’t imagine what it’s like to go to a website, or open a magazine, and have your point of view completely ignored, and neither, it appears, did Time.