No, Patton Oswalt Was Not Comparing Rape to Comic Books

No, Patton Oswalt Was Not Comparing Rape to Comic Books 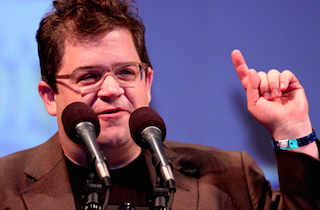 In the week since 22-year-old Elliot Rodger went on a killing spree that left seven people dead, including himself, there has been a massive amount of discussion online and elsewhere about the apparent role that misogyny played in mindset leading up to the violent incident. One look at the #YesAllWomen hashtag will tell you what you need to know about how people are dealing with the aftermath of this tragedy.

On Friday, comedian and seasoned Twitter lightning rod Patton Oswalt contributed this nugget of knowledge to the larger conversation:

Within a few hours, the message was retweeted nearly 1,000 times, and while many people responded appreciatively, there were A LOT of users who did not understand what he was trying to get across and immediately accused him of treating the issue of rape too lightly. Here is a sampling of the outrage he received:

@pattonoswalt What? Hope you get tons of twitter stars for explaining to "nerds" (?) why women dislike rape and comparing it to comic books.

@ZensRockets Rape is serious. Trivializing it by comparing it to comic books is dismissive.

I suppose I could ask: "Why so casual?"

totally appropriate things to compare. I can't see any fallout happening from this. @jaubertmoniker @pattonoswalt

The backlash was strong enough that Oswalt felt the need to combat it with this three-part explanation:

(2 of 3) I was trying to speak directly to all of the MRA dolts in my feed and all their disgusting reactions to #YesAllWomen.

(3 of 3) That ANY of you took it for a joke is beyond me. There is NO comparison between rape & any MRA concerns. THAT WAS MY POINT.

As Oswalt explained, he was not equating the difference between sex and rape with the difference between Marvel and DC Comics (the “x1000” could have been a good tip-off there), but rather using a “nerd culture” analogy to explain what is fundamentally wrong about the perspective of Men’s Rights Activists (or MRA’s) who have an inordinate amount of trouble seeing things from a woman’s perspective.

Perhaps Oswalt’s followers just could not comprehend the idea of a comedian trying to make a serious point on Twitter. Just because he tells jokes for a living means he can’t address an issue like rape?

The clearest explanation of what it is Oswalt was trying to say came from one self-described “feminist” whose message he retweeted:

.@pattonoswalt I'm an actual feminist woman (not faux feminist) & your analogy is FINE. Teach using metaphors that WORK with your audience.

As we found out this week, Oswalt knows he’s in the “click-bait club” and with 1.73 million followers and counting, he can expect every comment he makes on Twitter to be dissected and misinterpreted to death. But that doesn’t mean he’s going to stop speaking his mind. He made that clear enough this afternoon: