No, Paul Ryan Was Not Caught by a Hot Mic Saying ‘Waste of My F*cking Time’

At the end of the GOP leaders weekly briefing on Capitol Hill, which was carried live by CNN this morning, Speaker of the House Paul Ryan (R-WI) walked away after answering a handful of questions from reporters.

Prior to CNN going back to studio, someone could be heard clearly saying “waste of my f*cking time” on the air. 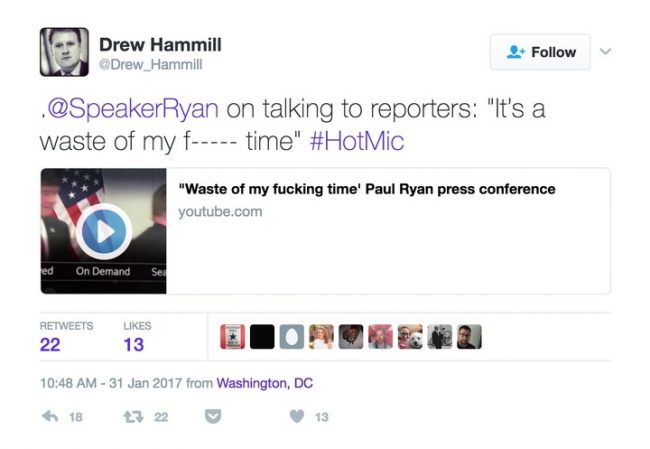 Except, that is almost certainly not the case.

Watching the video, Ryan was well away from the microphones when the comment was tossed out. In all likelihood, this was either a reporter or a tech who was a little too close (and loud) to the network’s mic.

But that didn’t stop Hammill from publicly lobbing out that accusation without any proof whatsoever.

After Hammill’s tweet accusing Ryan of profanely dismissing the press, he was immediately called out. Ryan’s communications director told him it wasn’t Ryan.

@Drew_Hammill Drew, that is not Speaker Ryan. You know better.

And others noted that is was clearly not Ryan while admonishing Hammill:

this is a lie. a blatant lie. you should be ashamed of yourself @Drew_Hammill #Drewisaliar https://t.co/EIPX7B3owS

Why are you suddenly not doing any fact checking? @Drew_Hammill lied for his boss @NancyPelosi, & you should call him out fot it. https://t.co/gWrANm2eCt

This is shameful, the epitome of unprofessional and absolutely unbecoming for someone in @Drew_Hammill's position. https://t.co/TSnspuJVc7

.@BrendanBuck tells me that was not his boss. Will take his word for it and I apologized.

And Buck accepted the apology, noting that Ryan isn’t one to swear like that:

@Drew_Hammill thank you. appreciate it. he’s not really an f-bomb guy.