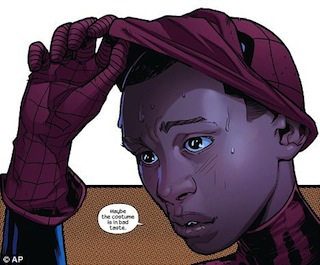 “Oh my God, you guys! Did you hear? Marvel Comics killed Spider-Man and they made him some black, gay guy!”

Yes, chances are good that you’ve heard or read something similar to that in the past 24 hours. And, you know what? It’s complete spider sh*t. Peter Parker is not dead and there’s no gay Spider-Man running around taking his relationship with Harry Osborn to the next level. However, that’s not stopping some Conservative media figures from completely distorting the truth to gin up outrage. Why don’t we actually go over the facts?

Yes, a Peter Parker is dead. But, no, it’s not the one fans have been reading about since 1962. Just like nearly every comic book controversy that gets picked up and misunderstood by the media, this development takes place in an offshoot title that exists in a different universe than the main Marvel one. Confused? Yeah, well, this is something comics do all the time. I’ll try to explain it as simply as I can.

I apologize. To the uninitiated, the next paragraph is going to read like gibberish but it’s important you know the truth so you can see how ridiculous this “scandal” really is.

Long story short, the Peter Parker who died is from the “Ultimate” universe, a universe that exists in the “Ultimate” series of Marvel comics (Ultimate Spider-Man, Ultimate X-Men, etc.) that was created so that the basic Marvel stories can be updated for a new generation. At its simplest, the Ultimate books retell all of the origin stories from the 60s and sets them in the 21st century. However, after the origin stories were told, the Ultimate series moved away and went in their own direction. “Ultimate” Peter Parker isn’t even the first major character to die in this world. Just a few years ago, Marvel published a huge “crossover event” which was meant to narrow the Ultimate world and featured the deaths of everyone from Wolverine to Magneto. Following this event, the “Ultimate Spider-Man” title, the first Ultimate series published, was the only one that continued. Then, recently, Peter Parker died in that series and, yesterday, the publishers introduced Miles Morales, a half-black, half-latino teenager who will replace Parker as Spider-Man.

The “Ultimate” Spider-Man, that is. Not the regular one. He’s doing fine.

So, how did the media treat a simple plot twist in this offshoot comic series? By completely taking it out of context, of course.

The worst offender was the Daily Mail which published an article so distorted it’s almost a thing of beauty. The issues start with the headline:

To use the parlance of comics, “What the !?&!@ are they talking about?”

The main problem with the article is that the author clearly, like so many who covered this story, tried to blatantly hide the fact that this isn’t the “real” Spider-Man who’s being replaced.

Lets look at how the article opens:

“He started life as a white science geek living with his uncle.

But now to reflect the racial changes in America Spider Man has been given a makeover – as a half black half Latino teen.

Miles Morales has replaced Peter Parker as the face behind the famous webbed mask, Marvel Comics has revealed.”

There is absolutely no mention that this takes place in an alternate universe. This isn’t mentioned for 21 more paragraphs at the very bottom of the article. Granted, Daily Mail “paragraphs” are rarely more than a sentence, but this is still blatant deception. This is how the article ends:

“Not everything in the world of Spider Man has changed, however.

The Ultimate imprint is separate from Marvel’s other comics – where Parker is alive and well.

Ummm, thanks. Either this article was purposefully written to trick people or it is the worst journalistic writing I’ve seen since my third grade paper “broke” the story of Tommy Jenson’s nose picking problem. Structuring the article this way would be like me writing an article about the city of New York being destroyed by a giant explosion and then ending it like this:

“Not everything about New York has changed, however.

The New York I write of is separate from our New York – which is fine and dandy.

The destroyed New York exists in the 1996 movie Independence Day which has an entirely different reality, sources said.”

Now lets move on to the whole gay thing. First off, it’s upsetting that that would even be a problem. What’s the matter, bigots? Gay people can’t be superheroes? I thought they looooooooved dressing up in tights. The real issue here is that NO ONE SAID THIS NEW SPIDER-MAN IS GOING TO BE GAY. NO ONE AT ALL. THE DAILY MAIL IS BLATANTLY LYING.

Here’s the quote that they use to get their provocative headline from:

“Italian artist Sara Pichelli, who designed Spider-Man’s new look, added: ‘Maybe sooner or later a black or gay – or both – hero will be considered something absolutely normal.’”

Basically, the artist said that, in the future, gay superheroes could be a normal thing. That comment has absolutely nothing to do with this Spider-Man, the regular Spider-Man, or the Spider-Man currently singing on Broadway. It’s about superheroes in general.

Jesus, Daily Mail. If I say that, sometime in the next century, their could be a gay president, are you going to use that quote for an exclusive report titled “Barack Obama Comes Out Of Closet!”?

So, despite the Daily Mail article being complete nonsense, it’s being cited in a number of areas as proof that gay Spider-Man is right around the corner. The Drudge Report linked to it with the headline as proof that Spider-Man “…could be gay.” This follows the equally deceptive headline “MARVEL Kills Off SPIDER-MAN, Replaces with Half-Black, Half-Hispanic Reincarnation…” that links to a completely neutral CBS New York story that, thanks in part to the Drudge link, now has the most offensive and ignorant comments you could ever hope to read. Go ahead and peruse them if you want to spend the rest of the day hating humanity.

Glenn Beck also brought up the nonexistent gay thing on his radio show today. Beck, to his credit, made it clear that this Spider-Man was an alternate one. He did, however, have his own, slightly more paranoid issues with the new character…

Did you know, Miles Morales looks exactly like Obama!

So, lets get this straight. Marvel Comics is trying to brainwash kids into voting Democrat by making a new character who kind of, maybe, looks like the President if you squint hard enough? And this is a sign of some vast Liberal conspiracy?

God, conspiracies were so much better when they were as simple as hiding in grassy knolls and shooting people.

If you’ve made it this far in this post, you’re probably wondering why I’m wasting so much time on such an admittedly silly story. Well, if you put aside all of the radioactive spider stuff, this is just more proof of the absolutely deplorable cynicism in the media. Reading the way that Daily Mail article is structured and the way the Drudge links are phrased, it’s clear that the writers are banking on attracting bigots. It wouldn’t be news to regular people that Spider-Man is black, hispanic, or gay…unless said people don’t like blacks, hispanics, or gays. The writers of these pieces probably aren’t racists or homophobes, but they’re certainly profitting off them.

Allow me to reprint just one of those CBS article comments:

“Yes, it is a form of Genocide against the White Males. I too will not buy any product from a company that portrays White Males as buffoons and morons, and being humiliated in their commercial advertisements.
For example I haven’t bought a single product from Frito Lay since their Super Bowl ads in which every White Male was seen being humiliated in front of White Women, and Persons of Color.
Are you listening Corporate America? This REVERSE DISCRIMINATION has got to stop. It’s no more acceptable than discrimination against anyone else.”

If you’re blatantly trying to deceive your audience with ginned up stories just so you can cater to the type of person that uses the word “genocide” to describe a Frito commercial, then you need to take a hard look at what you’re doing. You’re worse than J. Jonah Jameson.

God speed, Miles Morales. May you handily defeat evil both on the page and off. And, just to entertain me, may you one day be played by Donald Glover.

That would make this whole thing worth while.