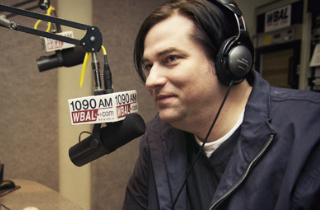 In the wake of a tough conservative defeat in Virginia’s gubernatorial election, conservative radio host Derek Hunter took to his Town Hall column to decry libertarianism for essentially not playing enough ball with his beloved GOP.

There’s lots of junk within Hunter’s column, so bear with me through a hefty fisking. Let’s start with the opening paragraph:

So… you once registered for a political party? Good for you! Just as a “pro-tip”: If you want to sound authoritative about the libertarian movement, you might not want to use a big-L “Libertarian.” That’s a political party with which many — if not most — libertarians do not associate. By and large, libertarians reject partisan political gamesmanship in favor of the grander Battle of Ideas™.

So, right off the bat, you can tell Hunter has a certain level of cluelessness about his subject. And then there’s this doozy of a paragraph:

By not even loosely defining the parameters of a set of beliefs, Libertarians allowed their brand – as it was – to be hijacked by anyone willing to wear the label. They went from the movement for individual responsibility, small government and free markets to a gaggle of misfits who want pot and prostitution legalized and a total non-interventionist foreign policy.

So according to Derek Hunter, Expert in All Things Libertarian, people who believe in individual freedom and are skeptical of the ever-expanding warfare state have hijacked a movement that… already deeply included those beliefs.

Honestly, what does being a Libertarian mean beyond legalizing drugs, banging hookers and sitting by while the rest of the world blows itself up?

It should be quite clear by now that Hunter is just mad that libertarians aren’t conservatives. By picking the issues on which libertarians and conservatives most vehemently disagree, he conveniently broadsides the whole movement as being solely about the “hookers” and drugs. In other words: why can’t you libertarians just invade more countries and lock up more people for victimless crimes?

He then goes on to attack the central figure in modern libertarian thought: Reason magazine.

The great Reason magazine is a wonderful publication filled with great articles, solid journalism you won’t find elsewhere…and a voice that does little more than complain.

Reason is great at highlighting abuses by every level of government, stories ignored by other media outlets. But you won’t find much in the way of philosophy or solutions. (There’s some, it just doesn’t seem to be a focus.) They preach to the choir, and it ends there.

That’s funny because within libertarian circles, Reason often takes flak from the “Rothbardian” types for being too solutions-oriented and too Beltway-like by engaging in policy discussion. But I imagine Mr. Hunter knew that already seeing as he knows everything about the “Libertarian” movement.

What’s more is that Reason constantly offers up policy solutions and waxes poetic about libertarian “philosophy” (since that’s what libertarianism is, a philosophy). They just get ignored by partisan conservatives like Mr. Hunter, who wave away any policy that involves cuts to the military, scaling back the surveillance state, or legalizing certain victimless crimes.

Hunter went on to contend that libertarians enjoy basking in their own “smugness” by rooting for Republicans to fail. He cites the very scientific poll he conducted by looking around a crowded bar on election night 2008. And then we see the real reason for this column:

[A] “Libertarian” candidate for governor in Virginia – many of whose views would disgust “real” Libertarians – pulled 7 percent in a race decided by much less pretty much solely on the strength of his party ID.

Ah, yes. Like many others before him, Hunter wants to blame libertarian voters for conservative Republican Ken Cuccinelli‘s loss in the Virginia gubernatorial election, even though it is mathematically impossible for LP candidate Robert Sarvis to have spoiled the election for the GOP. And yet, libertarians have been on the butt end of these conservative sore loser hissy-fits.

Later in the column, you just can’t help but laugh out loud when Hunter claims we are witnessing “The disintegration of Libertarians.” As I’ve written before, the libertarian movement is alive and doing very well. One needn’t look much further than Students for Liberty, the college libertarian organization that has vastly expanded its numbers in each of the last five years.

But here’s where Hunter may actually have a point: Highly un-libertarian commentators who latch onto libertarianism and bastardize the definition threaten the movement’s integrity. While he ignores Glenn Beck as an example of this, he does cite HBO’s Bill Maher:

Perhaps the best-known of the bastardized self-definition of Libertarian is Bill Maher. Maher is a Libertarian like David Ortiz is a world-class sprinter. But with a definition as firm as a bowl of Jell-O, there’s no one to say he isn’t.

In his largely ignored HBO show, Maher labels himself a Libertarian. On the Internet, a lazy, compliant media perpetuates that label, and soon it becomes accepted fact. In reality, Maher doesn’t have the first clue about the virtues of individual liberty, nor does he possess any love of a Libertarian philosophy beyond wanting to smoke weed and bang hookers.

But who’s saying he’s not a Libertarian? Who challenges his claim in any public and sustained way? No one.

Yeah, except plenty of people have said something, including this writer and the late conservative icon Andrew Breitbart.

Ask any committed libertarian how they feel about Bill Maher’s libertarianism and you will undoubtedly get a hearty chuckle. (Also: If Maher’s show is so “largely ignored,” why is Hunter worried about him corrupting “confused people’s” understanding of libertarianism?)

Nevertheless, we libertarians should do a better job of telling that one HBO host he’s not a libertarian, okay?

When that’s the “strongest” “point” among 1,000 words of tripe, maybe it’s time for Hunter to rethink whether his tantrum was worth writing at all.