Not In Danger At All: Media’s Wish For A Mayor Weiner Likely To Be Granted 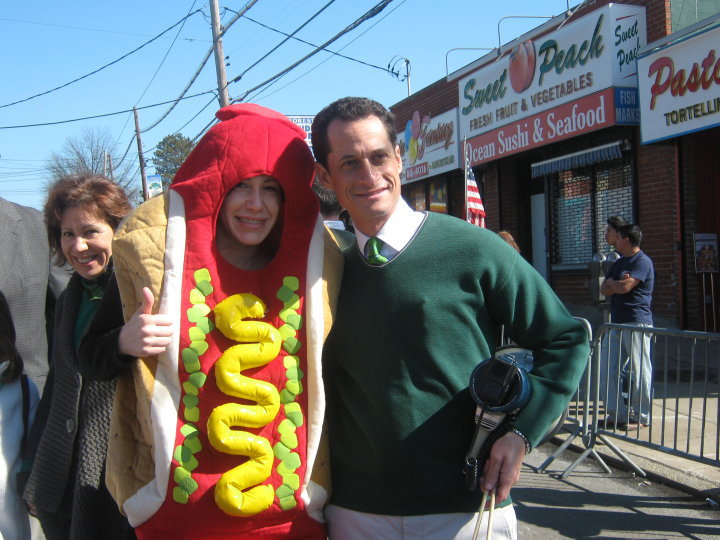 Yup… in a story to end all stories when it comes to those that writers say practically write themselves…Anthony Weiner admits on a day named in honor of wieners everywhere that more cheesy, sketchy, lewd photos and messages starring the legendary Carlos Danger (Weiner’s Twitter handle) really should be of no surprise to anyone. After all, he warned us back in April that this day was bound to come, right?

Still, give Weiner credit for coming up with perhaps the greatest code name, like ever. Know this: Every single guy—particularly those I know who will be out at the Parker House or Leggett’s at the Jersey Shore this weekend—is absolutely thanking Weiner for the nickname…because when you’re a player who introduces himself as Carlos Danger, the chance for romance automatically goes up tenfold.

So is this the end for Weiner’s political ambitions? The media certainly doesn’t hope so. Between Eliot Spitzer—the guy who paid obscene amounts of money for the professional services of a former Parker House regular named Ashley Dupre—running to become Comptroller of New York, and Weiner looking to be in charge of arguably the greatest city in the world, it certainly beats having to report on about pesky items such as budgets, taxes and security with those boring no-name candidates doing all the talking.

But can Weiner still win? You’re kidding, right? The way it works these days, his poll numbers will jump 5-7 points as a result of this latest revelation. The thought process from Weiner supporters is the following: If his wife–who must really, really want to be First Lady of New York–can continually forgive him, why shouldn’t they?

At last check, both Spitzer and Weiner were leading their respective races and showed no signs of relinquishing those leads. But now that today’s news is out…Weiner might as well start measuring the drapes at Gracie Mansion right now.

And the media—local and national—wouldn’t have it any other way. This is certainly another easy story to talk about in the world of cable news. Here’s how it works: A producer books one guest who finds Weiner’s actions deplorable and yearns for the good old days when politicians didn’t engage in such behavior. Of course, that time has never actually existed… the only reason why it seems this stuff happens more now is because of sites like The Dirty.com—the fine folks who broke the newest Weiner story—didn’t exist back in the day. All one had to worry about was Woodward and Bernstein. That said, could you imagine JFK even surviving five minutes in a TMZ kind-of-world?

Anyway, once a producer has guest #1 in place…it’s off to find a foil, likely a political strategist, who can fill the role as the “as long as he can do the job, his private life is private” advocate. Evoke Bill Clinton, claim this kind of behavior happens all the time, and bam…you’ve got yourself a compelling segment to run with for the next three days.

Never mind, of course, that Weiner engaged in this behavior even well after going through the humiliation of resigning from Congress. Add it all up, and it appears to say that the 48-year-old didn’t really care much that he lost his job, his dignity, the trust of his wife, after getting caught the first time. Because there he was—right back at it more than a year since leaving Capitol Hill…

National Hot Dog Day has been celebrated since 1972.

Anthony Weiner could send out 100 hundred more photos and sexts to girls half his age from now to November.

He’ll still be celebrated in the streets of New York and throughout news rooms across the city when he becomes its next Mayor come Election Day.

The deeply flawed story that keeps writing itself.