Note To Media: Stop Calling It An “Oil Spill”; It’s A Disaster 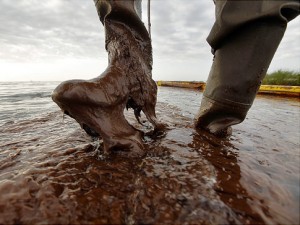 Roughly two months ago an oil rig exploded in the Gulf of Mexico, killing 11, spewing countless barrels of oil into the ocean and causing unknown harm to a fragile environment (and economy that it supports.) Since then the media (including this site) has used “Gulf Oil Spill” and “BP Oil Spill” as shorthand to describe the story. But the events in the Gulf that started as “a spill” have evolved to something much greater in scale. It is now a full-fledged disaster, the magnitude of which is still unfolding – and calling it anything less does not do the story the justice it deserves.

There is no great conspiracy here – its not as though the mainstream media is trying to undersell this story (in truth, after a relatively slow start, they have helped invigorate efforts to deal with this disaster.) But the news media are often quick to come up with labels and sign-posts for big stories, then slow to change. Environmental disasters typically start with a geo-specific “brand,” like Three Mile Island or Love Canal. But as the story evolves, so too does should the reference point made by reporters and columnists alike. Take for example the Bhopal Gas leak (as it was originally called) which is know better known as the Bhopal tragedy.

Its not so much that news writers and editors are lazy, its an economy of words that fuels the decisions to use short hand for major stories – we do the very same here at Mediaite. But words matter. Now that the story has entered its third month, and there is still no end in site for the millions of gallons of crude oil spewing into the ocean, we will, from here on in stop calling this an oil spill or leak, instead referring to it as the “(BP) oil disaster.” We think its time that all journalists covering this story do the same.

This is not an oil spill (which implies a one time event) this is a, thus far, never ending oil spew. It is an environmental, economic and growing political disaster. The end of which does not seem to be on the horizon.

The media has been spending countless hours demanding that President Obama do more, emote more, and devote more resources to this tragedy. Now its time for the media to do its small part, by accurately portraying what this is – an unmitigated disaster.