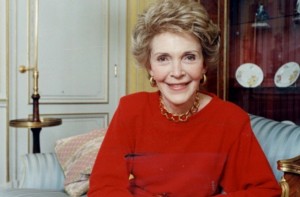 There really isn’t anything sacred anymore.

We live in an angry, polarized, cynical time when seemingly everyone has a megaphone via Twitter, via a byline. So when former first lady Nancy Reagan passed away this morning at age 94, you can see the wave of negativity building no more than 60 seconds after the announcement of her death was made. Here’s just a few snapshots of nice sentiment shared on social media already:

If I understand Christianity correctly, when Nancy Reagan gets to heaven Ronald won’t remember her. Just kidding. He’s in Hell. #NancyReagan

Reagan spent both terms proselytizing for jesus to the american people and how did god repay him? 10 years of being a vegetable!!

I also remember how “Just Say No” became a proxy for a vicious drug war that ignored the medical and economic elements of addiction.

OK, it’s Twitter and therefore almost sadly expected in these situations. But one would expect more from major media when it comes to Mrs. Reagan’s obituary. Enter the Washington Post’s Lois Romano, who (originally) decided to go with this as her opening paragraph (emphasis mine):

Nancy Reagan had an undeniable knack for inviting controversy. There were her extravagant spending habits at a time of double-digit unemployment, a chaotic relationship with her children and stepchildren that could rival a soap-opera plot, and the jaw-dropping news that she had insisted the White House abide by an astrologer when planning the president’s schedule.

Monday morning Update: Ms. Romano and/or a Washington Post editor decided to stealth-edit the piece and has completed altered the aforementioned opening paragraph without any note to readers informing them of the change. Further updates will be provided if she responds to Mediaite’s request for comment.

Gives it a nice Perez Hilton-esque tone to kick things off right, don’t you think? Of course, barely mentioned in this 3500+ word “obituary” is Mrs. Reagan’s signature campaign as first lady in the form of her Just Say No campaign, which nobody (lucid) can argue wasn’t a well-intentioned initiative to primarily keep kids off of drugs… just as First Lady Michelle Obama’s Let’s Move campaign — stupidly criticized by some conservative commentators — isn’t well–intentioned to get children to eat better and exercise more at a time obesity is skyrocketing among young people.

Mrs. Reagan’s most-prominent initiative as first lady was her Just Say No drug-awareness campaign, aimed at preventing and reducing recreational drug use among young people. But time after time, her efforts at developing a substantive role for herself were overshadowed by parallel revelations about her pricey clothes and rich friends and about her meddling in her husband’s official business.

Know this about the writer: Judging by her Twitter account, it appears she loathes the Republican party and also appears to have affinity for one female Democratic presidential candidate in particular going back years to her time at Politico. Just how she got the official nod to reflect on the life of Nancy Reagan by the powers that be at the Washington Post is an utter mystery.

So that’s where we are now, folks: Even obituary writers for major publications are hopelessly biased. To that end, here’s some other touching thoughts from Romano later in the column:

But the glamour soon was seen as ostentation during a steep recession. After complaining that the White House residential quarters were in disrepair, and noting that she could find no set of matching china in the place, Mrs. Reagan turned to affluent friends to raise funds for $800,000 in renovations and $200,000 of new china.

Although no public money was spent, these two expenditures became symbols of her excesses and attitudes. A flamboyant trip to England for the wedding of Prince Charles and Lady Diana six months into the administration, during which she attended 15 glossy events in five days, gave her detractors more fuel.

Mrs. Reagan took Washington by storm in 1981. Even before her husband — a former movie star and governor of California — was sworn in, she swept into town with a larger-than-life cadre of wealthy California friends and celebrities who wore sable coats, knotted traffic with their shiny white limousines and threw lavish parties the likes of which were unprecedented at inaugural festivities.

‘Nuff said. But remember, this isn’t a red/blue/only-one-side-does-it argument. It’s a reflection of just how polarized we’ve become as a society.

Welcome to American media in 2016… where respect, class and dignity are all relics of the past.

And apparently, those three items can’t even have a temporary rebirth… even in the moments and minutes after the death of a former first lady.