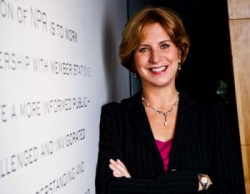 The back and forth continues between Juan Williams, Fox News, and NPR. Earlier today NPR CEO Vivian Schiller told the Atlanta Press Club earlier today “he should have kept his feeling about Muslims between himself and ‘his psychiatrist or his publicist.'” Update: Schiller just apologized for her remarks saying “I spoke hastily and I apologize to Juan and others for my thoughtless remark.”

Earlier this is the memo she sent out to member stations.

“A critical distinction has been lost in this debate. NPR News analysts have a distinctive role and set of responsibilities. This is a very different role than that of a commentator or columnist. News analysts may not take personal public positions on controversial issues; doing so undermines their credibility as analysts, and that’s what’s happened in this situation. As you all well know, we offer views of all kinds on your air every day, but those views are expressed by those we interview — not our reporters and analysts.

“Second, this isn’t the first time we have had serious concerns about some of Juan’s public comments. Despite many conversations and warnings over the years, Juan has continued to violate this principal.

“Third, these specific comments (and others made in the past), are inconsistent with NPR’s ethics code, which applies to all journalists (including contracted analysts): ‘In appearing on TV or other media. … NPR journalists should not express views they would not air in their role as an NPR journalist. They should not participate in shows … that encourage punditry and speculation rather than fact-based analysis.”

“More fundamentally, ‘In appearing on TV or other media including electronic Web-based forums, NPR journalists should not express views they would not air in their role as an NPR journalist.’

“Unfortunately, Juan’s comments on Fox violated our standards as well as our values and offended many in doing so.”

Emphasis mine, because that appears to be the root of NPR’s problems here. Essentially, Schiller is asserting that what Williams said on O’Reilly would either have been inappropriate on NPR or that he would have known better than to say it on NPR. It’s a conclusion I happen to disagree with. I frequently listen to Williams’ new analysis on NPR, particularly Weekend Edition Saturday with Scott Simon, and while I might have been surprised to hear Williams say what he said, I can certainly imagine him doing so. Much as I can imagine, say, Scott Simon calling him out on it and asking him to explain himself. However, as it stands, one is left wondering whether NPR’s reaction had more to do with their perception of Fox News than anything else. Audio of Schiller’s remarks below.