NSA Leaker Comes Forward: ‘I Have No Intention Of Hiding Who I Am Because I Have Done Nothing Wrong’ 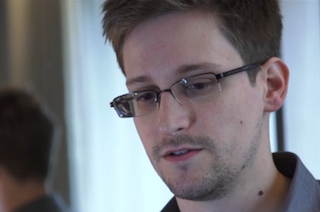 (UPDATED: With Interview video below, via CNN) The Guardian has revealed, at his request, the identity of the source behind the largest leak in NSA history.

“I have no intention of hiding who I am because I know I have done nothing wrong,” said Edward Snowden, a 29-year-old former employee of the CIA who has spent the last four years working with the NSA in conjunction with various defense contractors.

Snowden handed over a bulk of highly classified material from the secretive organization to Guardian journalist Glenn Greenwald, who describes the initial set of materials:

In a note accompanying the first set of documents he provided, he wrote: “I understand that I will be made to suffer for my actions,” but “I will be satisfied if the federation of secret law, unequal pardon and irresistible executive powers that rule the world that I love are revealed even for an instant.”

[…] Despite these fears, he remained hopeful his outing will not divert attention from the substance of his disclosures. “I really want the focus to be on these documents and the debate which I hope this will trigger among citizens around the globe about what kind of world we want to live in.” He added: “My sole motive is to inform the public as to that which is done in their name and that which is done against them.”

After copying the last amount of information, Snowden asked for some time off, and disappeared from his domestic life in Hawaii rather mysteriously. He has since been hiding out in a hotel room in Hong Kong.

Snowden is well aware that the United States government will almost certainly arrest and prosecute him:

He predicts the government will launch an investigation and “say I have broken the Espionage Act and helped our enemies, but that can be used against anyone who points out how massive and invasive the system has become”.

The only time he became emotional during the many hours of interviews was when he pondered the impact his choices would have on his family, many of whom work for the US government. “The only thing I fear is the harmful effects on my family, who I won’t be able to help any more. That’s what keeps me up at night,” he said, his eyes welling up with tears.

UPDATE:
Watch the interview via CNN:

Watch the interview and read the whole article HERE.