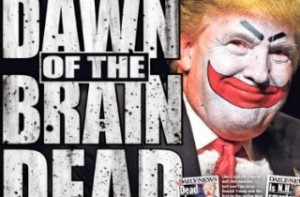 Make no mistake: Like many newspapers today, the New York Daily News is a struggling publication. No shock there given the digital revolution that began in earnest at the beginning of the decade making the print business a tough one to be in right now.

But the NYDN is not only struggling, but barely breathing… so much so that its publisher (Mort Zuckerman) tried to sell it last year for pennies on the dollar and still couldn’t find any takers. And rightly so, because who in their right mind would take on a sinking ship that is hemorrhaging $20 million annually in losses? Staff is being cut left and right. Profits are shrinking, just like the size of the paper seemingly every day. The Daily News is now a shell of its former self, and unless it finds a sucker to buy it, the print edition will cease to exist before the next president is sworn in.

So as it tries to stay afloat, it does what anyone drowning does: It flails its arms wildly in an attempt to draw attention. In the Daily News’ case, that means outrageous headlines that are even over-the-top for a New York tabloid. But an effort to be bold doesn’t also have entail being stupid from a business perspective. And in that regard, the Daily News appears to be stuck on stupid.

So is the issue here that the paper has attacked poor Donald Trump viciously by putting a clown face on him after a loss in Iowa and a win in New Hampshire? Of course not. Run for president, make some provocative statements, suffocate the airwaves, gain popularity, pay the price in terms of mockery from the press and comics alike. It’s all part of the contract.

But here’s where the Daily News made a huge mistake today: This latest cover didn’t attack Trump as much as it ridiculed his supporters… the same kind that propelled him to a victory in New Hampshire — a state carried by Barack Obama twice — by a 2-to-1 margin over his next closest competitor. Nationwide, Trump is the clear frontrunner for his party’s nomination. He appeals to the kind of populist, blue collar folks that the Daily News usually appeals to. And when you mock millions as being brain-dead, as zombies, you alienate many of them to the point they — out of principle and mistrust — won’t ever buy your paper again.

So when the Daily News announces it next round of layoffs or shows losses growing to $25 million and wonders where it went wrong, think back to covers like this. Attack Trump all you like. But leave his supporters out of it, who are more diverse ideologically than the paper may realize.

Same goes for the running joke The Huffington Post has become. You may recall last summer that the online publication declared it would relegate its Trump coverage to the entertainment section only. Bold stand, right? At least until its traffic suffered to the point that it pathetically capitulated on that policy months later as Trump’s poll numbers continued to rise as his media dominance grew to unprecedented heights.

Now HuffPo is huffing again in the form of this headline:

The headline on the @HuffingtonPost headline is:

So… will that story just be seen in the entertainment section too? No matter… this just shows that children are running the show over at HuffPo now. And if it were truly bold, they’d put their money where their mouth is and stick Trump back in the original section he was in. But that’ll never happen, of course, because as principled — for lack of a better word — it tries to portray itself as being, it doesn’t have the guts to say no to the ad dollars Trump brings with him. As the old saying goes, base a person on their actions, not their words… or in this case, base a publication on its actions.

The Daily News. The Huffington Post. Sore losers and as petulant as the candidate they cover.

The press always openly laments the downward direction of political discourse by those running for the highest office in this land. Problem is, they’re not only no better, but infinitely worse. And in the case of the Daily News, there’s much more supply than demand.