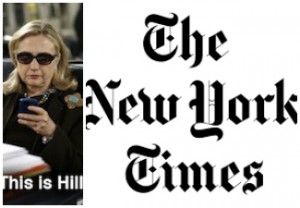 There’s a minor bit of conservative media “hilarity” going around positing former Secretary of State Hillary Clinton as an aged technological illiterate who doesn’t know what the term “going viral” means. It’s a well-worn campaign trope that dates back at least to George H.W. Bush‘s “amazement” at a barcode scanner, and as Redstate notes, includes Barack Obama‘s 2008 presidential campaign mocking Sen. John McCain for not being able to send an email.

Here’s how Redstate spins the anecdote in question:

The hip young party of hip young youngsters has two people still running for the nomination for President at an average age of 71 years. Of the two oldsters running, one of them today was baffled and alarmed when a hip young voter said his friend’s “selfie” went “viral.”

“You went viral?” Mrs. Clinton said to the man’s friend. “That sounds like some kind of disease.”

Now, even from that tiny context-free quote, it’s readily apparent that Hillary Clinton isn’t confused by the term, she’s making the presidential candidate version of a dad joke. Lame? Yes. Contrived? You be the judge, but clearly, the right-wingers who are seizing on this are reaching like Marco Rubio for a tiny Poland Spring bottle. Fair enough, they’re clearly-labeled opponents of Clinton’s, and hey, liberals did it to McCain,

That’s what I thought the first four times I saw this on conservative blogs, but then I clicked the link to the New York Times item this was based on, and discovered it wasn’t right-wingers who were twisting this self-evident joke into a “gaffe,” it was the New York Times’ reporter. I was prepared to issue a pass for the headline, “Hillary Clinton Puzzled by the Phrase ‘Went Viral’,” because reporters don’t get final say on headlines, but the body of Amy Chozick‘s item clearly matches:

Hillary Clinton has mastered the art of the selfie on the campaign trail, but she may still have something to learn when it comes to social media lingo.

When a voter approached her at a polling station at Parker Varney School in Manchester, N.H., on Tuesday to ask for a picture, he explained that his friend had taken a selfie with the former first lady on Monday and he was jealous because the shot “went viral.”

“You went viral?” Mrs. Clinton said to the man’s friend. “That sounds like some kind of disease.”

Now, it is remotely possible that the star of one of the biggest viral memes ever doesn’t know what “going viral” means, but there is nothing about that quote to support such an absurd claim. As a matter of empirical fact, “going viral” does, in fact, “sound like some kind of disease,” which concidentally disproves the maxim “It’s funny because it’s true.”

People trust websites like Redstate.com and The Federalist to make a dollar out of every fifteen cents that comes their way, but they’re supposed to be able to trust The New York Times not to.