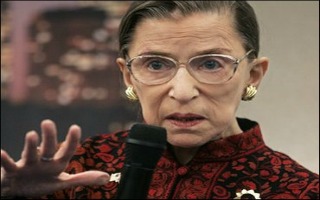 An article published Wednesday in the New York Times examining the timing of the retirements of Supreme Court justices betrays a sense of panic in the Gray Lady’s newsroom. Couched in a history of SCOTUS retirements, it is hard not to interpret this piece for what it probably is; a not-so-subtle warning to the reliably liberal and aging Justice Ruth Bader Ginsburg that if she does not shuffle off stage soon, she could be succeeded by a conservative if Romney wins the presidential election.

In reporter Sheryl Gay Stolberg’s article, “Age of Justices Raises Stakes of Presidential Vote,” she examines the retirement patterns of those SCOTUS justices that opted to leave the bench rather than die on it.

Due to the political nature of Supreme Court appointments, those justices more closely aligned with the ideological leanings of the sitting president tended to retire during their terms. Justices opposed to the sitting administration waited out their term in the hopes that a new, more ideologically simpatico president would soon come into office and choose their successor.

The Times article spends much of its 23 paragraphs noting that Justice Ginsburg, 80, is sitting on the high court amid a liberal presidential administration. The article further notes that she is the only sitting member of the Court that has hinted at her willingness retire.

Given how clearly competitive President Barack Obama’s upcoming reelection fight will be, the Times seems to be sending Ginsburg hints that she should retire soon lest she, and the nation, face the unthinkable – a reliably conservative 6-3 majority on the court.

The article does this by noting that the retirement patterns of SCOTUS justices over the last 20 years. Those justices appointed under John F. Kennedy retired under Bill Clinton. Ronald Reagan replaced many of Dwight Eisenhower’s appointees. George W. Bush replaced two of Reagan’s appointments and President Obama, thus far, has replaced two Supreme Court justices – one appointed by George H. W. Bush and another by Gerald Ford.

Bush and Ford’s appointees, Justice David Souter and Justice John Paul Stevens respectively, moved left as the court moved right – the Times article attests. But Ginsburg has been a reliable liberal vote and has never wavered. During the deliberations surrounding the constitutionality of Obama’s health care reform legislation, Ginsburg went so far as to take the opportunity to make many of the faltering Solicitor General Donald Verrilli’s arguments for him.

The prospect of Ginsburg being replaced by a Romney nominee is unthinkable.

So they take to warning Ginsburg of the fate of Justice Thurgood Marshall. Marshall, appointed by President Lyndon Johnson, could not wait out the 12 Reagan/Bush years. Amid failing health, Marshall had no choice but to retire. He was succeeded by Justice Clarence Thomas.

“Some say that Justice Ginsburg could face the same situation, now that Mr. Obama is caught in a tough re-election campaign against Mitt Romney,” writes Stolberg.

The Times article concludes with a note of palpable fear:

“She is betting everything she believes on either Obama winning re-election or her being able to survive until 2017,” said Lucas A. Powe Jr., a Supreme Court historian at the University of Texas School of Law. “If she dies and Romney wins, the Supreme Court will be the most conservative in history.”

Justice Ginsburg – the writing is on the wall for you. At least, one or more of those walls in that notable 52-story building at 620 8th Avenue.