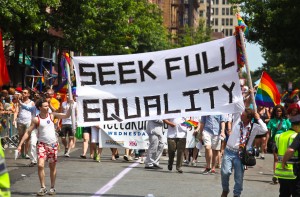 The New York City Commission on Human Rights has issued a guidance indicating that under existing discrimination laws, employers can be fined for calling transgender employees by the wrong name, gender, or pronoun.

“[City law] prohibits unlawful discrimination in public accommodations, housing and employment on the basis of gender,” the new guidance reads. “Gender is defined as one’s ‘actual or perceived sex and shall also include a person’s gender identity, self-image, appearance, behavior or expression, whether or not that gender identity, self-image, appearance, behavior or expression is different from that traditionally associated with the legal sex assigned to that person at birth.'”

Accordingly, the guidance lists several instances of what will now be considered a violation of the New York City Human Rights Law. Among them is “failing to use an individual’s preferred name or pronoun.” Employers can fall afoul of the law regardless of whether or not the individual has legally changed their name.

Likewise, “refusing to allow individuals to utilize single-sex facilities and programs” is also against the law. “Some people, including, for example, customers, other program participants, tenants, or employees, may object to sharing a facility or participating in a program with a transgender or gender non-conforming person,” the Commission predicts. “Such objections are not a lawful reason to deny access to that transgender or gender non-conforming individual.”

How much do employers or landlords stand to lose if convicted under the law? “The Commission can impose civil penalties up to $125,000 for violations, and up to $250,000 for violations that are the result of willful, wanton, or malicious conduct.”