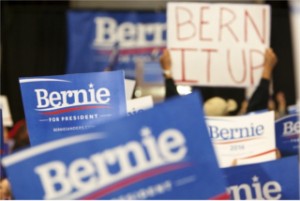 “Mr. Sanders is starting to sound like his worst followers,” Krugman writes in a column published Friday. The senator from Vermont, he adds, has become a “Bernie bro,” a pejorative term for Sanders’ (male) supporters that usually implies some ugly cocktail of misogyny, petulance, and self-righteousness.

But Krugman’s column, entitled “Sanders Over the Edge,” is less about the candidate’s temperament and more about his the paltriness of his proposals.

He writes that “pounding the table about big banks misses the point,” and yet “going on about big banks is pretty much all Mr. Sanders has done. On the rare occasions on which he was asked for more detail, he didn’t seem to have anything more to offer. And this absence of substance beyond the slogans seems to be true of his positions across the board.”

Even if one overlooks the scantness of his platform, Krugman writes, “the way Mr. Sanders is now campaigning raises serious character and values issues.” He points to Sanders’ recent streak of hostility aimed at Hillary Clinton, emulating elements of his supporters that have forsworn ever voting for her should she become the nominee.

Is Mr. Sanders positioning himself to join the “Bernie or bust” crowd, walking away if he can’t pull off an extraordinary upset, and possibly helping put Donald Trump or Ted Cruz in the White House? If not, what does he think he’s doing?