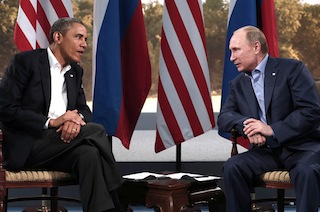 President Barack Obama cancelled his plans to meet with Russian President Vladimir Putin next month, a sign of escalating tensions between the two nations over Russia’s granting of temporary asylum to NSA leaker Edward Snowden, its intransigence on missile defense, and a host of other issues.

After Snowden was stranded in Moscow’s Sheremetyevo Airport for thirty-nine days, Russia granted his asylum request last week, against the U.S.’s adamant demands that he be turned over to face espionage charges.

Obama will still attend the G20 summit in St. Petersburg, but will not meet personally with Putin.

As the Associated Press points out, the move may not be limited to anger over Snowden. The U.S.’s frustration with Russia has been growing over a number of issues, including, most recently, its anti-LGBT laws, which Obama criticized on the Tonight Show Tuesday evening.

UPDATE: Below is the White House statement on the cancellation:

Following a careful review begun in July, we have reached the conclusion that there is not enough recent progress in our bilateral agenda with Russia to hold a U.S.-Russia Summit in early September. We value the achievements made with Russia in the President’s first term, including the New START Treaty, and cooperation on Afghanistan, Iran, and North Korea. However, given our lack of progress on issues such as missile defense and arms control, trade and commercial relations, global security issues, and human rights and civil society in the last twelve months, we have informed the Russian Government that we believe it would be more constructive to postpone the summit until we have more results from our shared agenda. Russia’s disappointing decision to grant Edward Snowden temporary asylum was also a factor that we considered in assessing the current state of our bilateral relationship. Our cooperation on these issues remains a priority for the United States, so on Friday, August 9, Secretaries Hagel and Kerry will meet with their Russian counterparts in a 2+2 format in Washington to discuss how we can best make progress moving forward on the full range of issues in our bilateral relationship.

The President still looks forward to traveling to St. Petersburg on September 5-6 to attend the G-20 Summit.