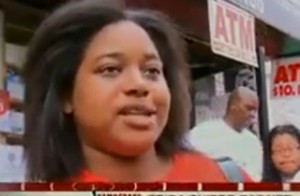 Things got intense backstage at the taping of ABC News’ 1-hour special “The President and the People: A National Conversation,” as Erica Garner, daughter of slain police chokehold victim Eric Garner, vented about being excluded from asking a question at the event after she had been promised she would have such an opportunity. From a White House pool report following the taping:

As we were being led into the room, we saw a clearly and very agitated Erica Garner yelling about her lack of participation in the program. She said she’d been offered a chance by ABC News to ask the president a question but did not get to do so. “I was railroaded! I was railroaded by ABC on the two-year anniversary of my father’s death!” Eric Garner died on July 17, 2014.

“That’s what I have to do? A black person has to yell to be heard?”

In a chaotic moment, Garner could be heard asking to speak to the president, he looked up, seeming to want to notice where the commotion was coming from.

Your pooler also stood in front of an attendee who confronted Texas Lt. Gov. Dan Patrick about his question to the president, saying it was inappropriate manner in which to address the president.

At one point, Garner was led by an aide inside the theatre to speak with the president. When an aide touched her arm, she recoiled, saying “Don’t touch me.” She was led back out again where multiple aides were overheard saying that POTUS wanted to speak with her, but we cannot confirm whether the meeting actually happened.

“After the ABC-hosted townhall that was taped this afternoon, the President had a brief opportunity to visit with Erica Garner who was upset that she didn’t get called on to ask a question.”

For her part, Garner appeared to be most angry with ABC, if her Twitter is any indication:

Yo this town hall that presidential town hall #abc arranged is a farce. It was nothing short of full exploitation of Black pain and grief

They lied to me and my family to get us to travel to DC to participate. Taking time away from things I had planned to remember my father.

they promised me that if ANY questions got asked of #POTUS that mine would be asked… They lied to both me and @osope to get us there.

I should have known something was wrong when they had little Cameron Sterling standing with the Lt. Gov of Texas while he denounced BLM

I need all of you to know that this #ABC town hall that will air at 8pm is a sham. They shut out ALL real and hard questions

I speak for myself and many others from the movement for Black lives when I say we wereused n I don’t endorse what happened today on #abc !

I went there trying to represent THE PEOPLE… #ABC wanted ratings even if it meant they had to profit from Black misery and oppression.

BECAUSE ABC lied to us… they promised if any questions were asked it would be mine… lies and exploitation. https://t.co/riVHw8GP31

Update: Here’s video from HuffPost Live that includes some of Erica Garner’s meeting with the President:

EXCLUSIVE VIDEO ▶️ @es_snipes explains her fury: "Not once did they mention Eric Garner or acknowledge the family."https://t.co/1nBxPf9H5T