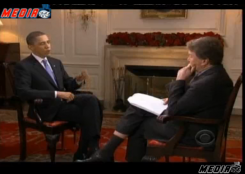 President Obama made his third appearance on 60 Minutes this Sunday to talk about the still-struggling economy and his decision to send 30,000 extra troops to Afghanistan, a decision he calls the most difficult in his presidency so far: “When you go to Walter Reed and you travel to Dover and you visit Arlington and you see the sacrifices that young men and women and their families are making, there’s nothing more profound.”

Interestingly, Obama says his West Point speech — which Steve Kroft described as “detached” and “analytical” (Spockish, as it were) — was “actually the most emotional speech that I’ve made in terms of how I felt about it.” It should be noted that this interview was taped prior to Obama’s Nobel Peace Prize speech, but it is clear the idea of a just and necessary war is already on his mind when he tells Kroft:

“One of the mistakes that was made over the last eight years is for us to have a triumphant sense about war. There was a tendency to say we can go in, we can kick some tail, this is glorious exercise, when in fact this is a tough business.”

Also, if you’re looking for a hint as to the platform Obama will likely be running on in 2012 this is probably it: “If I was worried about what was polling well there are a whole bunch of things we wouldn’t have this year… There are a whole bunch of things that I’ve staked my presidency on that are tough, and entail some risks, there’s no guarantees, but I’m confident we have addressed in the best possible way.”

And if you’re looking for a hint as to what the president’s demeanor might be going into his second year, meet (and welcome!) feisty and slightly annoyed Obama, who grew a bit impatient with Kroft’s when he called the West Point speech contradictory and laughed at the idea that solving the Afghanistan problem was anything but “hard.” Also, he’s not happy with the bankers: “I did not run for office to help out a bunch of fat cat bankers on Wall St.” (hear that Matt Taibbi!).

“They don’t get it…They’re still puzzled why is it that people are mad at the banks. Well, let’s see. You guys are drawing down ten million, twenty million dollar bonuses after America went through the worst economic year that it’s gone through in decades, and you guys caused the problem.”

One gets the sense nice Obama might be a thing of the Aughts. Video below.