Obama Reportedly Asked Clinton to Stay in Her Post in 2012, Finally ‘Gave Up’
VIDEO

Obama Reportedly Asked Clinton to Stay in Her Post in 2012, Finally ‘Gave Up’ 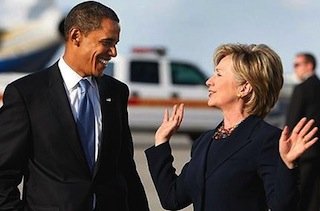 According to an excerpt of HRC: State Secrets and the Rebirth of Hillary Clinton, a book by Jonathan Allen of Politico and Amie Parnes The Hill to be released this week, President Barack Obama asked Secretary of State Hillary Clinton multiple times to stay in her post, only to be rebuffed by the former Senator and First Lady.

“Hillary had long since told Obama that she didn’t plan to stick around for his second term,” the authors wrote. “But now, after winning re-election, he didn’t want to let her go…’Would you reconsider, perhaps stay another year?’ Obama asked. ‘No,’ Hillary said. It was time for her to leave public office.”

What motivated Obama to ask her to remain?

“Hillary had proved herself a vital ally during the first term and the pair of one-time rivals had gotten into a rhythm,” the authors surmise. “Why end a good thing? Also, Defense Secretary Leon Panetta had told Obama on Election Day that he was leaving—meaning the president would have to find new lieutenants for both of the top seats in his war council if he couldn’t convince Hillary to stay put.”

“Even though he had refused repeatedly to take no for an answer in getting her to take the job in the first place, Obama pressed just once more, lightly, asking if she might stay just a little longer. That didn’t suit her, either. Obama gave up.”