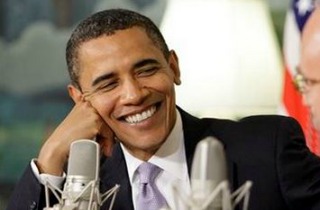 Appearing on a Spanish-language radio sports program on Tuesday, President Barack Obama pitched Hispanic-Americans on the benefits associated with enrollment in the Affordable Care Act. He said that Hispanics who may not be legal residents, or have family members of are not citizens, should not fear that “the immigration people” will discover their status as a result of their enrollment.

“Well, the main thing for people to know is that any information you get, you know, asked with respect to buying insurance, does not have anything to do with … the rules governing immigration,” Obama said in a Tuesday appearance on Univision Deportes.

“And you know, you can qualify if you’re a legal resident, if you are … legally present in the United States,” he continued. “You know, if you have a family where some people are citizens or legally here, and others are not documented, the immigration people will never get that information.”

“You know, you will qualify, you know, regardless of what your family’s status is,” the president added. “So, you know, people should not hold back just because they’re in a mixed-family status.”

Along with a major administration push to enroll young people in the ACA’s insurance exchanges, the White House has also conducted a public relations campaign to get Hispanics to enroll.

“Only 19% of Latinos and 20% of blacks have looked for health insurance on the exchanges, compared to 28% of whites, according to a Commonwealth Fund survey,” CNN reported in February. “In California, fewer than 20% of applicants identified themselves as of Hispanic, Latino or Spanish origin, according to the exchange. That compares to the estimate that about 46% of subsidy-eligible Californians are Latino.”

[h/t The Hill]
[Photo via The White House]