Obama Was Against Supreme Court Filibusters While He Was For Them 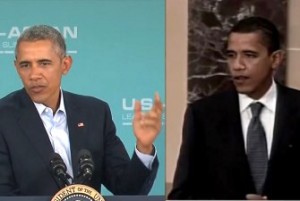 The recent death of Supreme Court Justice Antonin Scalia continues to have revealing effects in its aftermath, mostly unpleasant ones. One of the more awkward moments at any presidential press conference occurred Tuesday when President Obama was asked to explain his 2006 filibuster of Supreme Court Justice Samuel Alito‘s confirmation, and President Obama actually answered truthfully. It was, in a word, uncomfortable, moreso if you’re an admirer of the President:

Jeff Mason: how do you respond to Republican criticism that your position is undercut by the fact that you and other members of your administration who were in the Senate at the time tried to filibuster Judge Alito in 2006?

President Obama: Look, I think what’s fair to say is that how judicial nominations have evolved over time is not historically the fault of any single party. This has become just one more extension of politics. And there are times where folks are in the Senate and they’re thinking, as I just described, primarily about, is this going to cause me problems in a primary? Is this going to cause me problems with supporters of mine? And so people take strategic decisions. I understand that.

That’s an admission so sheepish, it has to remain extra-alert when it travels to Scotland, and a remarkable one for any politician to make. Unfortunately, it doesn’t tell the whle story, and absent the fuller context, sounds like a license to obstruct on purely political grounds. Come to think of it, so does then-Senator Obama’s description of the Senate’s advise and consent responsibility, which he described in 2006 while voting against Alito:

As we all know, there’s been a lot of discussion in the country about how the Senate should approach this confirmation process. There are some who believe that the President, having won the election, should have the complete authority to appoint his nominee, and the Senate should only examine whether or not the Justice is intellectually capable and an all-around nice guy. That once you get beyond intellect and personal character, there should be no further question whether the judge should be confirmed.

I disagree with this view. I believe firmly that the Constitution calls for the Senate to advise and consent. I believe that it calls for meaningful advice and consent that includes an examination of a judge’s philosophy, ideology, and record.

The opposing view to which he was referring, that only the nominee’s qualifications and character should be considered, was one held by Ronald Reagan, among others.

What the President didn’t say yesterday, or in that 2006 floor speech, is that even as he was participating in that filibuster of Samuel Alito, he was still opposed to filibustering Supreme Court nominees. He told George Stephanopoulos at the time that “These last-minute efforts using procedural maneuvers inside the Beltway, I think, has been the wrong way of going about it,” and that “there is an over-reliance on the part of Democrats for procedural maneuvers and mechanisms to block the president instead of proactively going out to the American people and talking about the values that we care about. And, you know, there’s one way to guarantee that the judges who are appointed to the Supreme Court are judges that reflect our values and that’s to win elections.”

So why would he join the filibuster if he thought it was the wrong thing to do? He could just as easily recorded his strong opposition to Alito simply by voting against him. To determine that reason, you have to look at what he said then, and what he said yesterday, because he told Stephanopoulos in 2006 that despite his support of the filibuster, “Judge Alito will be confirmed,” which means that he joined the effort to block Alito knowing full-well it had no chance of succeeding, and likely did so precisely because it had no chance of succeeding. Strategically, “fought to block” sounds much better than “voted against,” even though he knew well that they both had the same practical effect. In fact, had he been the 41st senator to join the filibuster, it sounds like he wouldn’t have done it at all.

That’s not a pleasant realization, but that’s politics. It’s why I’ve never been a fan of the crummy “hypocrisy” arguments that crop up over procedural issues like these from time to time, because my philosophy is that right makes right. If you’re right about something, then you do whatever you can do to win that issue. If joining a showy fake filibuster of Alito helped Obama get elected so he could enact the Affordable Care Act, I’m fine with it.

But I’m also generally in agreement with 2006 Obama that minoritarian parliamentary gimmicks like the filibuster are, at best, of limited usefulness because they shield the electorate from the consequences of their votes. You can vote for someone you think will be good for business, say, because you know that if they try to appoint a lunatic to the Supreme Court, the Democrats will step in and save your right to choose/right to vote/right to marry/right to be a Muslim. Ditto legislative filibusters.

The problem is that Republicans aren’t talking about blocking a nominee with whom they disagree, for show or otherwise, they are arguing that it’s not even enough to win elections, that even after being reelected twice, President Obama doesn’t have the right to even put forth a nominee. That’s a distinction that is being willfully ignored by the media, who love a good “both sides” narrative. What the Republicans are doing is nothing like what Obama did, or anyone else, for that matter.

As distasteful as I find it, though, this is preferable to what they could have done, which is to simply go through the motions and block all of Obama’s picks anyway. What they have done is exposed themselves, and sent a clear message to Americans: if they ever want anything to get done, they must either give Democrats the White House and ironclad majorities in Congress, or do the same for Republicans. If Hillary Clinton is elected, for example, there’s absolutely nothing to prevent 41 Republican senators from blocking her nominees for four years, or even eight years. As long as there are 41 Republicans in the senate, they never have to confirm another supreme Court justice again, even if they all die.

The reverse is also arguably true, although I think we all know Democrats would fold like meth-addicted origamists, but that’s just fine with me. Let the people choose, once and for all, which direction they want this country to go in, and then let them live with the result.