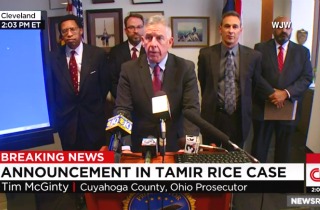 Cuyahoga County, Ohio prosecutor Tim McGinty announced this afternoon that the two officers involved in the fatal shooting of 12-year-old Tamir Rice were not charged by the grand jury.

McGinty explained that he recommended no charges too after reviewing the case, calling it a “perfect storm of human error” that showed no “criminal conduct” by the police.

He said one of the officers feared for his life when he saw Rice “drawing his gun from his waist.” It was a toy gun, but the officer did not know that in the moment.

McGinty said it would have been “unreasonable” to make an officer wait to see if a gun that someone was withdrawing from their pocket was real or a toy.

He brought up apparent errors by the 911 operator in not conveying the complete picture to the officers going to the scene.

You can watch the announcement above, via CNN.