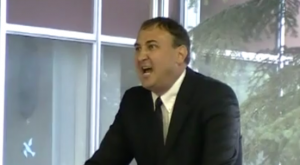 Sometimes local politics can be boring, but not when you have someone like Phil Davison. In a campaign speech asking for Stark County, Ohio’s Treasurer, Davidson screams and shouts and looks less like he’s trying to get the Republican nomination and more like he’s defending his heavyweight crown. Clearly he learned the wrong lesson from Linda McMahon. You’re supposed to go from wrestling to politics. Not the other way around.

In the amazing video uploaded to YouTube by the Stark County Political Report, Davison rants for a solid six minutes while the audience tries (and fails) to hold back laughter. While his eyes alternate between studying his prepared notes and bugging the hell out his sockets, he promises listeners that “drastic times call for drastic measures.” Whether or not those measures include a hardcore sleeper hold is not yet clear.

Still though, the more politics look like professional wrestling, the better. Not only will it help fulfill the prophecy set forth in Mike Judge’s Idiocracy, it will also be a whole lot more entertaining. Especially if people start imitating the really crazy wrestling like this.

UPDATE: PBS’s The Daily Need blog just did a great interview with Davison about his speech and his newfound fame. From The Daily Need:

“’My speech last night — I knew it might be a little over the edge, but that’s how I felt at the time,’ Davison said. ‘If it spurs someone to go on and say, ‘You know what, I want to go up there and talk like that too, I want to make a difference, I want to get involved in my community.’ If it affects one person in a positive way, then it was worth it.’”

You know what, Phil Davison’s kind of awesome. Check out the rest of the interview here.