O’Reilly: Guns Are an ‘Ancillary Issue’ in Mass Shootings (If Killer Is Muslim) 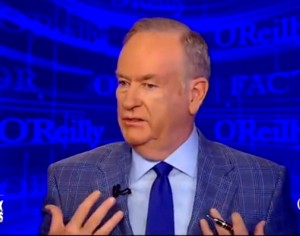 On The O’Reilly Factor Thursday night host Bill O’Reilly and guest Eric Bolling argued that the most salient issue facing America following the Orlando massacre was not easy access to guns or the mental health of disturbed young men — it was radical Islamic terrorism.

The fact that the murderer had been able to legally purchase guns despite having been under FBI investigation twice was an “ancillary issue. It’s not the main issue,” O’Reilly insisted.

Other attacks carried out by lone young men with a history of violence and mental health issues — such as the terrorist attacks in Aurora, Colo. and Newtown, Conn. — were “not directed in any central way,” he said. Orlando was an example of “organized, sanctioned violence,” while those former events were examples of “random violence.”

O’Reilly’s remarks followed a heated debate between Bolling and co-panelist Geraldo Rivera. If the killer in a mass shooting was a non-Muslim, Bolling said, they were simply “crazy, those guys were crazy,” he said, referring to the killers in Aurora and Newtown. Mateen was different because he had claimed allegiance to the Islamic State in a series of phone calls to local police and TV stations during the attack. (At various points in his life Mateen had also claimed allegiance to a host of other radical Islamic groups, some of which are opposed to ISIS.)