Oy Vey: Bloomberg Has The Chutzpah To Claim He Doesn’t ‘Force Anyone To Do Anything’ As Politician
video

Oy Vey: Bloomberg Has The Chutzpah To Claim He Doesn’t ‘Force Anyone To Do Anything’ As Politician 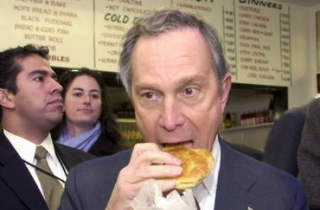 Sometimes you can’t help but wonder if NYC Mayor Michael Bloomberg is some brilliant parody of an oblivious yet sanctimonious politician.

On Wednesday afternoon, the city’s Nanny-in-Chief had the chutzpah (or “chootspah,” as Michele Bachmann would say) to claim that, as a politician, he does not “force anyone to do anything.”

Asked if he remembers the moment he became a crusader against illegal gun trafficking (one of his many causes), Bloomberg told reporters:

No, but I did get interested in public health a long time ago, as you know. And I think, as mayor, my responsibility is to do everything I can is to do everything I can to protect the health and safety and increase the longevity of the people that live in this city. As an American, and as a human being, I have a responsibility to not push, to not force anybody to do anything but to explain what I think and to educate people to the extent of what I believe that would be in their self-interest.

This coming from the man responsible for the city’s slew of new nanny state laws, such as: bans on sugary drinks sold in 16-ounce containers or larger; bans on the use of trans-fats in restaurants; bans on food donations to homeless shelters because the city could not track the salt and fat contents; some of the toughest indoor smoking bans in the country; and a boneheaded restriction on the amount of painkillers a patient can receive in hospital emergency rooms.

All of those laws require one thing to be actual enforceable “laws.” When a politician claims they aren’t “forcing” you to do anything, but are simply educating or gently “nudging” you, it’s just a polite way of getting around the cold, hard, undeniable truth: government is force.

Bloomberg sort of recognized the “force” aspect back in May 2012, when he told MSNBC that his sugary drink ban was “simply forcing you to understand what’s better for you.”

But the self-delusion gets even better. His Wednesday presser also contained this gem:

I think there are lots of kinds of dangerous activities if you want to do it — they may be things that I wouldn’t choose to do, but I would protect your rights to do that.

You mean potentially dangerous activities like… going to a bar where smoking is allowed? Or eating food at a restaurant that cooks with trans fats? Or drinking a large sugary soda? Or even smoking marijuana? Right.