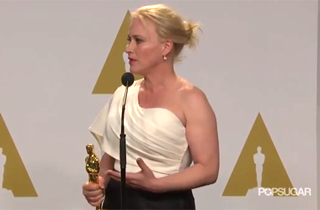 Though her speech calling for wage equality at the Academy Awards won raves, Patricia Arquette quickly lost some of that goodwill backstage when she expanded on that statement.

During her press conference backstage, Arquette, who won Best Supporting Actress for her role in Boyhood, explained what she meant by her statements:

“So the truth is, even though we sort of feel like we have equal rights in America, right under the surface, there are huge issues that are applied that really do affect women. And it’s time for all the women in America and all the men that love women, and all the gay people, and all the people of color that we’ve all fought for to fight for us now.”

By seemingly excluding everyone outside of white women in the fight for wage equality, Arquette inflamed the intersectionality crowd on Twitter, who pointed out that women can be gays and minorities too:

patricia's comments show the danger in not being hip to this whole intersectionality thing. women of color get erased.

put down your #BlackLivesMatter signs everyone, its time to fight for equal pay. just dodge the bullets in the meantime

to act like other groups owe you for the time you spent swooping in on your white horse. mkay girl.

Patricia Arquette sure ruined her nice moment. Fighting against one injustice does not excuse blindness to others. pic.twitter.com/lhlcyk6p7m

For a visual representation of what Arquette implied, here’s this Game of Thrones reference:

Watch below via Popsugar:

Wage equality will help ALL women of all races in America. It will also help their children and society.

Women have been basically paying a gender tax for generations.

Guess which women are the most negatively effected in wage inequality? Women of color. #Equalpay for ALL women. Women stand together in this

It’s possible that she wasn’t thinking clearly, given that she had just won an Oscar for a role she spent twelve years playing and those comments happened literally minutes after she received a massive award, so, yeah.