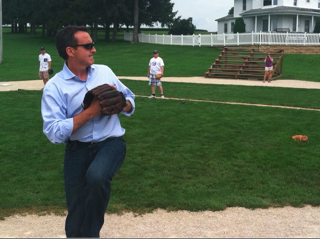 Given the sort of Game Change-esque drama in the Gingrich and Huntsman camps, the fact that this passes for controversy for Tim Pawlenty is likely a good sign. The Pawlenty campaign sent out a press release yesterday linking to what they considered favorable press from the Des Moines Register, attributing to Pawlenty a “winsome personality” and impressive resume. Missing from the press release? The anecdote that opens the piece, of the Republican presidential candidate ripping the pants off the Minnesota House Speaker.

The amusing (albeit worrisome to some degree) story that led the piece was likely chosen to showcase the color in Pawlenty’s personality, a trait that often falls by the wayside in any Pawlenty coverage. It’s the story of how a Minnesota House Speaker found himself pantless at an annual legislative softball game:

Then-House Speaker Steve Sviggum stood at the plate during Minnesota’s annual House-Senate softball game a decade ago when Tim Pawlenty, then a suburban legislator, sneaked up and yanked down his pants.

“There’s press all around, all these senators are all around, and I’m standing there with my softball pants around my knees,” said Sviggum, a close friend of Pawlenty. “Luckily I was wearing some shorts.”

As many outlets noted, these paragraphs were omitted from the press release version of the story. The Washington Post added that “a section of the Register piece under the heading ‘Pushing legal bounds of governor’s power’ was cut,” also, though as a segment that can raise questions about his ability to govern responsibly, makes some sense to remove. It’s the pants-dropping stories whose exclusion raises the most eyebrows. The Des Moines Register responded to the editing angrily, arguing that what was cut out “went beyond fair use”:

Register Managing Editor Randy Brubaker said the campaign distorted and excessively used the Register’s content without permission. Brubaker said the version of the article republished by the campaign – more than 20 paragraphs, highly edited – went beyond fair use and infringed on the news organization’s copyright.

The newspaper typically allows campaigns to reprint or reproduce three or four paragraphs, or about 200 words, of an article, Brubaker said. But it doesn’t allow selective editing within the excerpt.

These two stories– the anecdote and the removal of the anecdote– are hilarious, of course, for two reasons– the fact that one can, somehow, imagine a younger Pawlenty running onto a softball field and yanking someone’s pants of, and the fact that the Pawlenty campaign seems to believe that propagating a story that makes their candidate sound approachably wacky and refreshingly human (albeit in the sort of way where you have to watch your pants) would actually hurt their campaign– as if the problem is no one is taking Pawlenty seriously. Everyone knows Pawlenty has a good enough resume– no one doubts that, but few seem to care. The major roadblock for Pawlenty is that people think he has no personality not– unlike some of his competitors– that he has no experience. Fearing their candidate’s dark side, even if it does involve pant burglary, could be the campaign’s downfall.