Peace In Our Time: Dave Weigel Sort Of Makes Up With FishbowlDC’s Betsy Rothstein 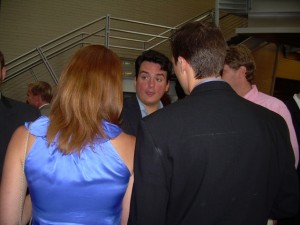 It might be an overstatement to say that Slate‘s Dave Weigel and FishbowlDC‘s Betsy Rothstein have been engaged in a long-running Cold War (perhaps a chilly skirmish?), but however you characterize it, Rothstein reports that a slimmed-down Weigel was considerably warmer toward her at MSNBC’s 15th birthday party.

As Washington’s premier gossip columnist, Rothstein is no stranger to the ire of her subjects, and Dave Weigel has been a frequent player in her repertoire of “characters.” She was the first to break news of Weigel’s participation in the now-defunct “Journolist,” and while Weigel has clearly not always relished her attention, he did concede recently that “I would definitely say that in the parallel universe where I’m still the blogger-on-things-conservative at WaPo, and I spent the last week chasing Sarah Palin’s bus, I am much less happy…”

Still, relations between the two could probably have inspired a new flavor of Dentyne, until Thursday night’s MSNBC fete.

Whether Weigel has accepted his lot in life as Betsy Rothstein’s muse, or succumbed to her barrage of offbeat olive branches (a Love Connection-style interview, a Weigel-gate anniversary lunch), or simply surrendered to the fact that she is everywhere, Betsy reports that their last encounter went surprisingly well:

But last night everything was different. There was a breezy, singsong feeling in the air. Weigel… looked noticeably slimmer to the point where partygoers were commenting on it. He also made grand efforts to stay off his BlackBerry and be more present than usual. Is this a new Zen Weigel? He didn’t sneer when I approached or look like he wanted to run for a bomb shelter. Instead, we engaged in relatively pleasant chit chat. I asked about a recent robbery in which his ipad and a myriad of keys were stolen. He told me he realized how focused people are on tweeting these days and how that likely contributed to no one noticing a thief taking his messenger bag.

One thing confuses me: isn’t the whole point of an iPad that it doesn’t have keys?

It might not seem like the biggest deal in the world, but in a town constantly embroiled in partisan warfare, and currently locked in a mortal struggle over the debt ceiling, perhaps the Weigel-Rothstein ceasefire can serve as a model for a new era of comity.