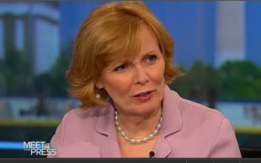 Every week, Peggy Noonan taps away at her Selectric typewriter, I assume, and offers new insight into what scares the old folks at the Wall Street Journal’s opinion page.  This week, it’s young people in journalism and the lack of Atticus Finch who was pushed from the roof in Vietnam . . . or something like that.

Noonan has decided there aren’t enough adults in charge and that we need old men (I guess old women wouldn’t be of any help).  Waxing nostalgic on the anniversary of the publishing of To Kill a Mockingbird, she’s decided that we need Atticus Finch to lead us through life and that he could be personified in, wait for it, former Republican National Committee chair and current Mississippi governor Haley Barbour.  She clearly has no interest in Sarah Palin, who is both not a man and also fits the description of “a Facebook jockey twittering from deepest cyberspace.”

She’s also anxious about young people in the newsroom.

In journalism the effects of cutbacks and lack of mentoring are showing their face, and will continue to. Maybe we’ll see it most dramatically when the lone person on the overnight news desk, aged 28, in a cavernous room with marks on the industrial carpet from where the desks used to be, gets the first word of the next, possibly successful terror event. On the Internet, you read the fierce posts of political and ideological writers and wonder, Why do so many young bloggers sound like hyenas laughing in the dark? Maybe it’s because there’s no old hand at the next desk to turn and say, “Son, being an enraged, profane, unmoderated, unmediated, hit-loving, trash-talking rage monkey is no way to go through life.”

Unless the 28-year old on the overnight news desk is actually carrying out the attacks, I’m not sure I understand what’s so fearful about having someone quick and nimble at news coverage, graphics and video technology providing the first glimpse of a terrorist attack, but maybe I’m missing something.

As to her point about young male bloggers sounding like hyenas and turning into “trash-talking rage moneys,” Noonan appears to have never clicked on National Review Online, for instance, where neoconservative Victor David Hanson (age 57) this weekend is in high panic over President Obama being on vacation and being a poseur. Or even Maureen Dowd (age 58) hacking away again at the Vatican for the New York Times.  Rage and sounding like a hyena isn’t synonymous with having a Foursquare account.  Sometimes it even comes with an AARP membership.

While it’s true that we all need a good editor, it’s not clear another hagiographic column devoted to the “greatest generation” is really helping things. Journalism has its problems and rage may be one of them.  But suggesting that young bloggers just need Haley Barbrour or Sen. Tom Coburn as leaders because they remind Noonan of Atticus Finch probably isn’t the answer.