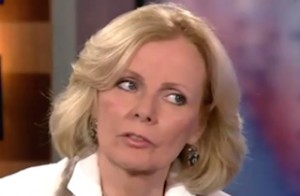 Columnist Peggy Noonan has basically given up on Donald Trump, which apparently is a shame for her because she thinks that “Sane Donald Trump” could have won the election easily.

The conventional wisdom this year is that after eight years of President Obama, this is a change election and a prime opportunity for a Republican victory. And had the Republican nominee been a change agent like Ted Cruz or Marco Rubio, they would have had a better chance. But because Trump is just so awful, it’s throwing a wrench in everyone’s plans.

Noonan, who calls Trump a “screwball” and says we’ve all gotten a glimpse into “the TV funhouse that is his brain,” invites readers in her latest WSJ column to imagine if Trump were sane:

Sane Donald Trump, just to start, would look normal and happy, not grim and glowering. He would be able to hear and act on good advice. He would explain his positions with clarity and depth, not with the impatient half-grasping of a notion that marks real Donald Trump’s public persona.

Sane Donald Trump would have looked at a dubious, anxious and therefore standoffish Republican establishment and not insulted them, diminished them, done tweetstorms against them. Instead he would have said, “Come into my tent. It’s a new one, I admit, but it’s yuge and has gold faucets and there’s a place just for you. What do you need? That I be less excitable and dramatic? Done. That I not act, toward women, like a pig? Done, and I accept your critique. That I explain the moral and practical underpinnings of my stand on refugees from terror nations? I’d be happy to. My well-hidden secret is that I love everyone and hear the common rhythm of their beating hearts.”

She believes that “Sane Trump” would have approached immigration “with a kind of loving logic” and would have “insisted that a healthy moderate-populist movement cannot begin as or devolve into a nationalist, identity-politics movement.”

And she even says a sane Trump would have not kept America in suspense about accepting election results:

Sane Donald Trump would not treat the political process of the world’s greatest democracy as if it were, as somebody said, the next-to-last episode of a reality-TV series. That’s the episode that leaves you wondering how the season will end—who will scream, who will leave the drunken party in a huff, who will accuse whom of being a whore. I guess that’s what “I’ll keep you in suspense” as to whether he’ll accept the election result was about. We’re being teed up. The explosive season finale is Nov. 8. Maybe he’ll leave in a huff. Maybe he’ll call everyone whores.

Does he know he’s playing with fire? No. Because he’s a nut.