Pinhead Or Patriot — Is The Alien In “V” Supposed To Be Barack Obama? 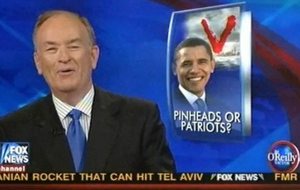 On Tuesday night, ABC’s “V” opened with a bang, drawing about 14 million viewers. It also did something that network dramas about space aliens that aren’t “The X-Files” tend not to do: set off a surprisingly heated political debate.

Why? A few reasons: the show jabs at “universal health care,” satirizes the media as access-hungry stooges (always fun), and has a charismatic alien leader who may or may not be a stand-in for Barack Obama. Bill O’Reilly sure thinks so.

Take it away, Chicago Tribune:

Imagine this. At a time of political turmoil, a charismatic, telegenic new leader arrives virtually out of nowhere. He offers a message of hope and reconciliation based on compromise and promises to marshal technology for a better future that will include universal health care.

The news media swoons in admiration — one simpering anchorman even shouts at a reporter who asks a tough question: “Why don’t you show some respect?!” The public is likewise smitten, except for a few nut cases who circulate batty rumors on the Internet about the leader’s origins and intentions. The leader, undismayed, offers assurances that are soothing, if also just a tiny bit condescending: “Embracing change is never easy.”

So, does that sound like anyone you know? Oh, wait — did I mention the leader is secretly a totalitarian space lizard who’s come here to eat us?

On last night’s O’Reilly Factor, Bill O’Reilly took things a step further. He kicked off his regular “Pinheads and Patriots?” segment with clips from “V,” including two where aliens tout their commitments to “spreading hope” and to providing “complete medical services to all.” O’Reilly’s take: “It’s pretty apparent the scriptwriters are taking some shots at President Obama. Whether that makes them pinheads or patriots, of course, depends on your political point of view.” Of course.

While O’Reilly fell in line with the “V Aliens=Obama Administration” theory, and some conservative bloggers tried to map out analogies between the show and contemporary America, it’s prompted some backlash on Twitter:

Rachel Sklar (I think she writes for some blog) pointed out that the show is, in fact, about hot lizard aliens.

AFP’s Olivier Knox (who Mediaite interviewed in August) and HuffPo Eat the Press editor Jason Linkins took a different approach, blowing up the real world/TV world analogies to absurd proportions (though an Orly Taitz cameo would be pretty sweet).

Meanwhile, Jake Tapper just seemed excited by the prospect of interviewing alien leaders with hard-hitting questions about their consumption of our brains.

The political controversy can only be good news for “V.” The opening night ratings are encouraging, but the lively debate around a show that is 95% entertainment is an even better sign of its endurance.