Pointing Out That Hillary’s Running on Her Gender Isn’t Sexist, It’s Just True 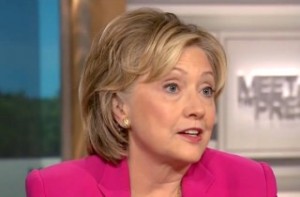 Rapper and Bernie Sanders supporter Killer Mike landed himself in hot water recently after saying the following about Hillary Clinton:

When people tell us, “hold on, wait a while”—and that’s what the other Democrat is telling you—“Hold on, Black Lives Matter, just wait a while. Hold on, young people in this country, just wait a while.” And then she get good, she have your own momma come to you, your momma sit down and say, “Well you’re a woman.” But I talked to [liberal activist] Jane Elliott a few weeks ago, and Jane said, “Michael, a uterus doesn’t qualify you to be president of the United States. You have to have policies that’s reflective of social justice.”

That uterus comment drew the ire of feminists and Clinton supporters, who bashed it as crude and sexist. “Can’t we just agree that reducing a female candidate to a reproductive body part is disrespectful?” Joan Walsh said in a typical tweet. The Clinton campaign called the comments “disappointing,” saying “Obviously if the suggestion there is that Hillary Clinton is asking anyone to vote for her based on her gender, that’s completely off base.”

There’s a case to be made that Killer Mike’s comments were inappropriate for their crudity. But that a) wasn’t a concern that was raised when supporter Lena Dunham asked Clinton if she had seen a man’s penis, and b) is kind of a given when you’re talking about a rapper whose lyrics include references to “freak sluts” and “monkey niggas.” I never heard liberal feminists make a fuss about Mr. Mike’s language before he attacked Clinton, to whip out the smelling salts now seems more than a little contrived.

For the sake of argument, let’s agree that the man who goes around with the word “Killer” in front of his name used language that is generally beyond the pale in presidential discourse. Critics also claim that the substance of his argument was sexist. So getting down to the real debate: was Mr. Mike right to imply Clinton is running on her gender, and if so, was it wrong of him to point it out?

The answers to those questions are yes, and hell no.

The number of times that Clinton had made appeals to voters based solely on her gender make it basically impossible to list them all, but I’ll give just a few examples as an illustration:

“I have seen many incredible things…I look forward to seeing a woman president.” https://t.co/Dati1JhTb5 pic.twitter.com/D5bzlg1nsv

Are you ready for the first woman president? #DemDebate #Hillary2016

“I just wanted to be here!”

“So I could say I saw the first woman ever to—maybe!—be president!” pic.twitter.com/6W3pm6oQtw

“I cannot imagine anyone being more of an outsider than the first woman president.”https://t.co/ybAEte5WkO

Hillary just became the first woman ever to win the #IowaCaucus. https://t.co/gqtX8PZfhP

With her historic win at the Iowa caucuses, Hillary just accomplished what no woman ever has before. https://t.co/GvAXGlUXVM

The story of 2 women with moms named Dorothy, sharing beers of the same name, toasting to the first woman president. https://t.co/ZM2anns4Cg

Hillary’s birthday is tomorrow—and she’s still on track to be the youngest woman US president ever. Sign her card! https://t.co/cLhVnvmvp1

Reading the above, can anyone claim with a straight face that the Clinton campaign’s reaction (“if the suggestion there is that Hillary Clinton is asking anyone to vote for her based on her gender, that’s completely off base”) is accurate?

Is Hillary Clinton running only on her gender? No, and it’d be absurd to claim so. But it’s absolutely correct to say that one of her campaign’s central messages is that you should vote for Hillary Clinton because of the historic implications. Hillary and Killer Mike are ultimately saying the same thing; one’s just saying it in a way that’s more palpable to the American public.

There’s simply no precedent for how much Hillary Clinton has relied on her personal identity to make the case for her candidacy. It’s something of a gospel truth among conservatives that Barack Obama won his way into office by “playing the race card,” but that accusation’s always lacked teeth. Obama avoided the topic whenever possible in 2008, only coming out and giving a “race speech” when forced to address the issue following the Jeremiah Wright scandal. Obama’s only response to questions about the fact that he’d be the first black president was to say that it was a bad reason to vote for him.

Marco Rubio doesn’t tweet daily reminders that he’d be the first Hispanic president, and the fact that Ted Cruz was the first Hispanic to win a presidential caucus has gone completely unmentioned by his campaign (and the media, for that matter). Don’t count on Sanders bragging about being the first Jew to win a presidential primary either. Only Hillary Clinton seems to expend so much time and effort convincing Americans to vote based on something that has nothing to do with her policies or qualifications.

Which brings us back to Killer Mike. He never said that Clinton shouldn’t be president because she was a woman, or that she was only running on being a woman. He was responding to the constant message from her campaign that you should vote for her because she’s a woman. His response– that you also need to have the right policies– seems eminently reasonable.

Clinton and her supporters are demanding the absurd. They are allowed to make Hillary the woman candidate that all women should support, crow about how awesome it will be to have a woman president, and tar her opponents as sexist. In reaction, her opponents are allowed to say… nothing. Make no mistake, Killer Mike could have spoken like an Ivy Leaguer instead of an entertainer: it was the message that angered them so.

I’m distinctly reminded of the absurd “privilege” mindset that’s in vogue among some on the left at the moment, which holds that men aren’t allowed to speak about– sorry, “mansplain”– certain issues at all. It’s a divisive and anti-intellectual strain of thought more common among pampered college students than thinking adults, but apparently it’s now also the official stance of a presidential campaign.