Pol Resigns After Scandal Involving Gov’t Funds, His Penis, And a Glass of Red Wine 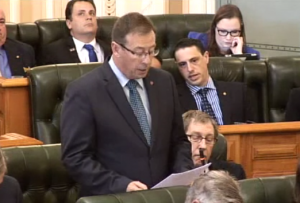 We may have found the Australian version of Anthony Weiner. Peter Dowling, a member of the Queensland parliament in Australia, ended up resigning in disgrace this week after he got caught in a sexting scandal of his own. But it wasn’t just that detail that got him in trouble, it was also his misuse of government travel funds with the woman he was having the affair with, and the fact that in one of the sexts he had his penis in a glass of red wine.

Dowling, who, by the way, used to chair the Ethics committee, was caught after his mistress sent a letter to the parliament detailing exactly what kind of scandalous activity he was up to.

She accused him of breaching parliamentary travel rules, failing to declare gifts and the “misuse of parliament assets” — in turning his Parliament House office and unit, as well as his electorate office, into a love nest…

“Some of the photos that Mr Dowling sent me were X-rated and pornographic, including photos of himself naked.”

Included in the texts is the picture of Dowling’s penis in the wine glass, with the words: “He wanted a red wine”. It was followed by another picture of the MP later toasting the camera with a glass.

Dowling was forced to resign, making a speech before parliament in which he apologized to his colleagues and his family, saying, “I cannot and will not defend any part of it.”

Watch a news report on the scandal below, as well as Dowling’s official resignation: