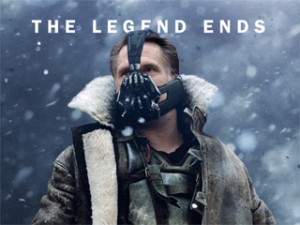 Word association is a fun psychological tool, but sometimes people take it way too seriously. Case in point, there is now chatter about Mitt Romney‘s Bain Capital and its more sinister homonym: Bane, the antagonist of The Dark Knight Rises, the final installment of Christopher Nolan‘s Batman movie trilogy. And, believe it or not, people see an association there. I haven’t seen the movie yet, but from what I understand, class warfare is one of the movie’s themes, and so, of course, people will make their humorous observations about the connection. What’s concerning is that people are actually taking it seriously.

Jon Stewart made light of this point on his show last night, but some political advisors and analysts are now taking the comparison seriously and speculating that it may have an actual impact on the campaign.

“It has been observed that movies can reflect the national mood,” said Democratic advisor and former Clinton aide Christopher Lehane. “Whether it is spelled Bain and being put out by the Obama campaign or Bane and being out by Hollywood, the narratives are similar: a highly intelligent villain with offshore interests and a past both are seeking to cover up who had a powerful father and is set on pillaging society,” he added.

I know it’s a cliché to say this nowadays, but how is this not part of an Onion article? “Democrats Call On Romney To Denounce Bain’s Vendetta Against The Batman.”

“But!” you say. “This is all just liberal nonsense! Surely no conservative commentators would take this seriously!” Two of them beg to differ.

Conservative commentator Jed Babbin told Secrets, “Now we have the new Batman movie with super-villain Bane, the comic book bad guy who broke the Bat’s back. How long will it take for the Obama campaign to link the two, making Romney the man who will break the back of the economy? Romney can’t win if he’s constantly on the defensive,” he said.

Even GOP advisor Frank Luntz jumped into the fray. “Hollywood does it again,” he told Secrets. “[Romney] had to know all this was coming and he should have done a lot more to prepare for it.”

One conservative analyst did dismiss the whole thing as ridiculous, but it’s out there. Now, before I patiently explain just how ridiculous this whole thing is, let me throw in my two cents about the whole concept of trying to link movies to political causes: why? Why are people so eager to always look for some sort of deep political code in movies? Yes, what Batman did in The Dark Knight may have been a little similar to George W. Bush‘s wiretapping, but you can’t seriously be trying to justify any political action based on something a fictional character did.

Now for the Bain-Bane thing. What exactly is the point here? What could anyone want to accomplish with a connection like that? I seriously doubt anyone is going to look at Mitt Romney and think “egomaniacal supervillain.” For one thing, he’s not interesting enough. What exactly would his supervillain power be? Boring innocent bystanders to death? The ability to fly through tax loopholes in a single bound?

But more to the point, the only thing Bain and Bane have in common is that they sound the same. That’s literally it. You would have to be one of the most gullible and/or naïve people on the face of the planet earth to have your voting decision influenced by something as meaningless as the name of a fictional character.

But it’s not just me who thinks this, it’s also the guy who co-created the Bane character back in 1994. Comic book writer Chuck Dixon had this reaction to the Bain-Bane connection.

“I saw it on FB like two hours ago. Ridiculous. Tho’ I got a cold feeling in the pit of my stomach that Rush (Limbaugh) may pick up on this. And that would be the second time he pegged me and Graham as liberals on his show.”

He later added, “Overgrasping Dems? Hey, if it gets Obama supporters into theaters. Maybe they’ll buy thousands of Bane toys to throw at Romney. It all adds to MY Bane capital. I wonder if the Romney campaign will contact me?”

So there you have it. Enjoy The Dark Knight Rises, everyone, and good luck trying to escape the political undertones. All we can hope for now is that everyone realizes using the movie footage in campaign ads would be a bad idea. Right? RIGHT? Because between this and the OWS outcry over the new Call of Duty game, I don’t know if I’ll ever be able to find a piece of entertainment that won’t in some way be given loads of unnecessary political significance.