Rush Limbaugh: ‘Do You Think That It Is Accidental’ That The New Batman Villain Is Named ‘Bane’?
audio

Rush Limbaugh: ‘Do You Think That It Is Accidental’ That The New Batman Villain Is Named ‘Bane’? 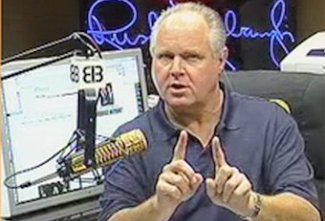 It looks like Rush Limbaugh is yet another political pundit taking time out of his life to seriously consider the political ramifications of the villain in the new Batman movie being named “Bane” which just so happens to sound the same as the corporation Mitt Romney used to run. But Limbaugh isn’t just concerned about the effect. He’s also asking the important question; “Why?” After pretending that he didn’t know the name of the film (Come on, Rush. We know you’ve got your IMAX tickets reserved! Everyone does!), Limbaugh asked his listeners if this “coincidence” could possibly be an accident.

The implication here, if I’m correct (which I’ve occasionally not been), seems to be that the Obama team purposefully made up the Bain controversy knowing that people would confuse the two.

Why stop there?! If sneaky Democrats could put guns in Mexico purely as a long conspiracy to make American guns illegal, who’s to say this whole Bane character isn’t part of a brilliant Lib plot?

I know what you’re saying. You’re saying, “Jon. I’m a Batman expert. I know that Bane was created way back in 1993.” Well, think about it, reader? What year was the year Mitt Romney first start thinking about getting into politics? 1993!

“By 1993, Romney had been thinking about entering politics, partly based upon Ann’s urging and partly to follow in his father’s footsteps.”

They’ve been plotting this the whole time!

You may think I’m crazy, but just wait till the 2016 election when the Democrats are fully prepared to destroy dark horse GOP candidate Sen. Thomas A. Twoface.