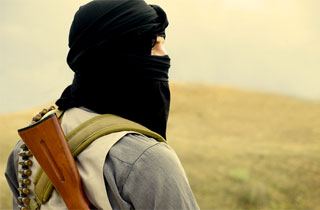 Have you ever wondered if your next-door neighbor was a convicted terrorist who got out of terrorist prison and now goes to yoga class with you? Thankfully, a New York state representative will assuage your fears with his proposed terrorist registry list.

State Sen. Thomas Croci, a newly-elected GOP representative from Islip, NY, says the bill will make it a felony for “anyone in New York convicted of a state or federal crime of terrorism or who has committed a ‘verifiable act’ of terrorism,” to live in the Empire State without registering. (It’s not clear as to whether this applies to people who simply threaten terrorism.)

“It will discourage terrorists worldwide from entering New York, require those already in New York to register and be monitored,” Croci said to the New York Daily News. “Most importantly, it will provide our law enforcement with an important new tool, to immediately arrest a terrorist who has not registered and submitted to monitoring once their presence in New York State is discovered.”

Wait, what? Don’t terrorists go away for really really long periods of time, because the federal punishment levels for their specific crimes are enhanced according to US Sentencing Guidelines Section 3A1.4? (Here’s a helpful explainer of what that leveling jargon actually means on a federal level, but the short story is: they usually go away for many years.)

In any case, the likelihood that someone will be able to spend any amount of time outside of prison is fairly low, and Croci’s fellow lawmakers thankfully realize that.

“Wouldn’t those people already be in jail or out of the country?” one anonymous Democratic lawmaker said, “holding back laughter.”

“It seems like a blatant attempt to get cheap press on something that is being handled by more serious people.”

Nope, Croci says. “This legislation will send a clear message to all terrorists — Stay out of New York.”

They probably will. In federal prisons.