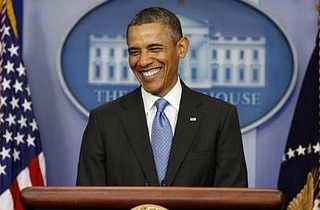 President Barack Obama is a go along to get along kind of fellow. He is less concerned with legislative victories which advance his agenda than he is with comity for its own sake. That is, evidently, the impression with which one POLITICO columnist is left. It is probably one that is shared by all the right people – those worth quoting as sources in dispatches chronicling the endless posturing in Washington — but it is not an opinion that was shared by much of the voting public over the course of this shutdown.

As the government shutdown ended and the crisis surrounding to the latest debt ceiling increase subsided on Wednesday night, it became apparent that Republicans had almost completely surrendered. They played a losing hand poorly, and the president and the members of his party in Congress stood their ground. Obama finally had a victory under his belt – something that he has conspicuously lacked since the start of his second term in office.

“Did Obama shift his image from the man who’ll always give on anything?” he queried.

Oddly, this claim is neither made nor supported in the post to which Dovere linked. The article asserts that the president is seen as an excessive compromiser by only one group: Democrats.

“Democrats will be looking to see whether Obama takes a more proactive, aggressive approach to pushing a Democratic agenda, rather than saying he’s just a partisan for common sense,” Dovere wrote.

To support this, he cites the White House’s regular insistence that they made no demands on Republicans in exchange for them to merely pass a clean continuing resolution to fund the government.

RELATED: Obama Responds to Anonymous Quote: ‘No One is Winning’ If Shutdown Continues

“That’s part of the problem, complain Hill Democrats, and defines the main strategic change many of them want to see coming out of the last few weeks,” he continues. “They should have pushed longer for a higher continuing resolution, goes the thinking, fighting harder to restore the sequester cuts and maybe eke out a compromise that would have put at least a few billion more into the continuing resolution.”

This is where flashing red warning signs should be illuminated for Democrats and the members of the press uncritically conveying their thinking. The notion that the president is a compromiser more prone to capitulate to Republican demands than fight for his own is not one shared by the voting public.

In a NBC News/Wall Street Journal poll which showed the public was deeply frustrated with Republicans, one of the only silver linings for the GOP was how poorly the White House’s insistence that they would not negotiate with House conservatives was playing outside the Beltway.

A plurality, 43 percent, disagreed with the president’s decision to “not negotiate with Republicans in Congress about the health care law and the federal budget until Congress has reopened the government and raised the country’s debt ceiling limit.”

An AP poll showed similar results. In that survey, 52 percent said that Obama “is not doing enough to cooperate with Republicans to end the shutdown.”

A Bloomberg survey released late last month showed that 61 percent of Americans disagreed with the president’s demand that Congress raise the debt ceiling with no corresponding spending cuts – the kind of cuts insisted upon by Republicans in Congress.

None of this suggests that Democrats are in sync with the rest of America if they have convinced themselves that this president is a perceived as a pushover. The opposite appears to be the case: his position over the course of the shutdown was recognized by more Americans as being uncompromising and rigid.

The president was an effective executive when he was bolstered by majorities in both chambers of Congress. Since his party’s edge in Congress has waned, his prowess as a negotiator has also ebbed. This would suggest that the president is simply not a skilled negotiator unless the deck is stacked dramatically in his favor. Refusing to compromise with those who disagree with him will not remedy this condition – it will, in fact, exacerbate it in voters’ eyes.