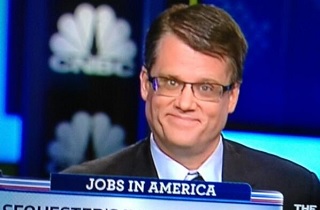 This weekend saw the best Twitter feud ever when Politico reporter Ben White changed his Twitter profile photo to one that made him look like he was trying to kill everyone on Twitter with mind bullets, and Chartgirl.com founder Hilary Sargent offered this gentle critique: “@morningmoneyben Meh on the new profile pic.”

In response, White delivered a wig-flipping worthy of William Shatner in an IHOP kitchen.

Sargent notes that, prior to White’s photo change, she had urged Business Insider to include White in it’s list of Money Honeys (no corpses allowed edition, but that generosity bought her no quarter from White’s neurotic wrath:

“Why would you say something like that? What is the matter with you?” White asks, to which Sargent replies, in successive tweets, “I liked the old one better. I didn’t say you looked ugly.”

White replied, “I liked your old face better. ‘@lilsarg: @morningmoneyben I liked the old one better.'”

“Okay. I was kidding. Relax. Your face looks fine in both,” Sargent replies.

At this point, it starts to look like maybe White is just the world’s greatest deadpan comic. “meh on your entire existence,” he replies.

After a few more reassuring tweets from Sargent, White changed his profile photo back, and tweeted “happy now you horrid monster?”

Sensing a put-on, Sargent says “WTF? Tell me you’ve been kidding all along so I can breathe a sigh of relief.”

Nope. “People are the worst,” White says, adding “@lilsarg is your profile pic serious or some kind of joke? because…”

A few admonitions later, White blocked Sargent. Eventually, he thought better of it, and acknowledged the error of his ways, apologizing to Sargent in an email, and endorsing her charts on his Twitter feed.

All’s well that ends well, I suppose, but unless this was Ben White’s first day on Twitter, he ought to have known that if the worst thing someone says about your picture is “meh,” you’re probably ahead of George Clooney in that regard.