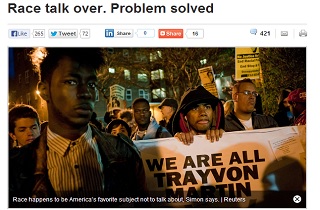 White people, am I right? The reactions to President Obama‘s recent remarks on the killing of Trayvon Martin, and its reflection of the black experience, have run a rather predictable gamut, but Politico’s Roger Simon penned a column that epitomizes a muted perspective in this conversation: the seemingly well-intentioned, yet detached, white middle. The premise of his “Race talk over. Problem solved” column is that Americans should talk more about race, but then he demonstrates why maybe some of us shouldn’t.

There are many problematic things about Simon’s column, but his good intentions buy him some benefit of the doubt when he criticizes the first black president’s dealings with race, then extensively cites another white guy as backup. Indeed, I made some of the same observations about President Obama’s infrequent commentary on explicitly racial issues, like the Skip Gates arrest and his initial response to a question about Trayvon Martin’s death, but Simon and his muse, author David Maraniss, conclude from those observations that the President is “uninterested in race.”

As I also observed, though, the President’s infrequent, feather-light forays into race during his first term were greeted by shrill overreactions that the mainstream media played along with, offering no benefit to the President, or to black people. What Simon and Maraniss ignore is the fact that the President has stood up for black people in other ways, such as his staunch opposition to election laws that have a disproportionate racial impact.

But hey, tomato, tomahto, those guys are entitled to their opinion. Maybe the President should have spent his first term walking around like Nat X, and enjoyed relaxing after his 2012 concession speech. At least Simon has the stones to call out his own:

We talk about race only at moments of crisis, when it cannot be avoided. Otherwise, race is something that, as a nation, we wish we didn’t have to discuss at all. Sort of like the Vietnam War, only more so.

I am talking about white America, of course. For black people and other minorities, race is something they have to confront on a daily basis.

This is a great observation, one which often gets lost in the conversation. Polls consistently show that white people are more optimistic about race than black people, which only makes sense. I’m sure that polls would also show fish are considerably less concerned about breathing underwater than scuba divers. Yet such polls also ignore the fact that “white America” is no more monolithic than ” black America,” and that racial attitudes break down far more cleanly along partisan and ideological lines. This is an important distinction to make, because these “racial chasm” polls are used to give the dual impression that maybe black people are being too sensitive, and that white people don’t care. Neither is true, there are lots of white people who do care.

There is, however, a somewhat monolithic white culture that, in all of its supposed liberalness, promotes racial stereotypes and excludes the voices of non-whites, then poignantly observes it all. When Simon says White America doesn’t want to talk about race, it is as part of that culture, one that capitalizes on its own support of white supremacy to occasionally concern-troll about it.

The fact is, Americans of all sorts are constantly talking about race, and issues of race have factored heavily into the political debates of the past five years, from immigration, to the economy, to voting rights. If Simon doesn’t hear those conversations, its because he’s not listening. About halfway through his column, he removes any doubt about that:

The Zimmerman acquittal was a different kind of crisis. There had been demonstrations, and President Obama could not afford to have them grow into riots. But he also wanted white America to understand what black America was going through post-verdict.

If you grant that Roger Simon is being sincere, his column, at best, leaves the reader with the impression that as necessary as it is, the conversation about race is doomed to the forces of white inertia. Roger Simon really wants to talk about race, but nobody else does, so why bother? What he really demonstrates, by invoking the notion that black people cannot be trusted not to riot, is that he should do a lot less talking about race, and a lot more listening. There are many people who would benefit from that lesson.