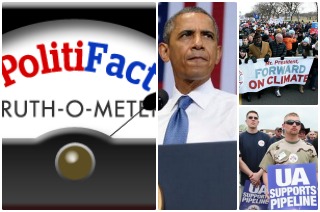 The fact checking institution PolitiFact has a rating that it reserves for only the worst of situations. It is a rating it uses when a politician or political group utters a statement so baseless, so divorced from reality, that it can only be called what it is: a lie. PolitiFact’s “Pants on Fire” rating is reserved for only the most egregious of misrepresentations – more often than not, it is assumed that those misstatements were made willfully or maliciously. This rating could have been applied to President Barack Obama’s asinine assertion that the Keystone XL Pipeline would create no more than 2,000 jobs. The president’s assertion contradicts even the findings of his State Department, which has been “studying” the pipeline’s impact for almost longer than it would take to build it. But PolitiFact just could not do it. They stopped short of calling the statement a “Pants on Fire” lie and instead issued the sheepish, mealy-mouthed rating, “false.”

“The Keystone XL pipeline that would carry oil from Alberta, Canada, to refineries on the Texas Gulf coast presents President Barack Obama with no easy choice,” PolitiFact inexplicably begins. Because reducing American dependence on foreign oil while creating employment opportunities in the hard-hit industrial Midwest is a real head-scratcher.

But PolitiFact soon gets to the point – the hard choice Obama faces is a political one; whether to pit two Democratic constituencies, environmentalists and union labor, against one another. Certainly, this is a political conundrum that rarely arises and no American president has ever successfully navigated.

Apparently, though, Obama has made a choice between the two constituencies. In a speech this week, the president threw organized labor under an 18-wheeler when he said that Republicans were misrepresenting the positive impact of the Keystone Pipeline. The president chose the environmentalist left:

“Republicans have said that this would be a big jobs generator. There is no evidence that that’s true,” Obama said. “Any reporter who is looking at the facts would take the time to confirm that the most realistic estimates are this might create maybe 2,000 jobs during the construction of the pipeline — which might take a year or two — and then after that we’re talking about somewhere between 50 and 100 jobs in a economy of 150 million working people.”

PolitiFact woefully observes that the lowest State Department estimate for directly created construction jobs associated with the pipeline was 3,900.

Even if this low estimate materialized, it would not be the end of Keystone’s job creating potential. The economy is interconnected and every facet of the pipeline would indirectly create part or full-time jobs; port workers, truckers, environmental engineers, and many other professionals would be supported by the continental energy transit route.

“The White House provided no supporting evidence and the administration’s own State Department predicted that while the pipeline would produce few permanent jobs, the construction process itself would create nearly twice as many jobs as the president said,” PolitiFact concludes damningly before chickening out and issuing their “false” rating.

But what do you expect from an institution which put their name behind a “lie of the year” in 2012 which turned out to be true by January, 2013?