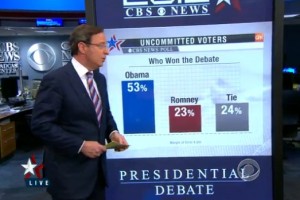 Although President Obama faced high expectations going into Monday night’s foreign policy debate, he may have exceeded them, according to CBS News’ post-debate poll. Among uncommitted voters, President Obama was declared the winner by 53% of respondents, versus only 23% for former Massachusetts Governor Mitt Romney. 24% thought the debate was a tie. A CNN/ORC poll of debate viewers, which included proportionally more Republicans, also found President Obama the winner, 48% to Romney’s 40%.

The President needed a big win, and these numbers certainly qualify. The President saw his momentum reversed by a disastrous performance (polling-wise, at least) in the first debate, and while he scored a clear victory in the second debate last Tuesday, the results from Monday night’s debate are much more convincing, perhaps enough to move the needle on tightening swing state polls. Unfortunately for the President, there will likely be less viewers for this debate, and less interest in foreign policy as a voting matter, but the two candidates did steer things around to kitchen table issues, as well.

Here’s CBS News’ report on their poll, including some interesting internals, where the President crushed Romney on every issue except China:

Update: President Obama was also the winner in a PPP poll of swing state voters, by a margin of 53% to Mitt Romney’s 42%. Public Policy Polling’s full press release:

PPP’s post debate poll in the swing states, conducted on behalf of Americans United for Change, finds that Barack Obama was the big winner in tonight’s face off. 53% of those surveyed in Colorado, Florida, Iowa, Michigan, New Hampshire, Nevada, North Carolina, Ohio, Pennsylvania, Virginia, and Wisconsin think Obama was the winner to 42% who pick Romney.

Maybe even more important than the sentiment on who won the debate is who folks in these swing states are planning to vote for now: 51% of them say they’re going to support Obama to 45% who stand with Romney. That includes a 46/36 advantage for Obama with independents, and Obama also seems to have made a lot of progress with groups he was previously down by wide margins with. Among men (50/47) and whites (50/46) he is trailing only slightly and with seniors he’s actually ahead 52/47.