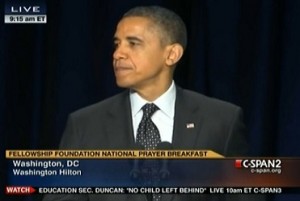 President Obama delivered remarks at his fifth National Prayer Breakfast Thursday morning, a speech which seemed designed to be as inoffensive as humanly possible, at least to some people. While some of the President’s supporters may take exception at key omissions from the speech, such as even a veiled reference to marriage equality or gun violence, and others are irritated that he participated at all, given the breakfast organizers’ support for anti-gay causes, but it was the speech’s recurring theme of unity through faith that really pissed me off.

The President’s decision not to invoke marriage equality, or gun violence, or any of the dilemmas currently facing the country, is defensible as a practical, abundantly cautious attempt to keep the peace, to avoid accusations of politicizing the prayer breakfast. Even an oblique mention of these could come off as seizing the imprimatur of almighty God, no matter how delicately phrased.

The President’s decision to attend, despite the Fellowship Foundation’s baggage, is easy to chalk up to a similar desire to silence the din that would surely erupt were he to refuse, but there’s also probably some truth to the answer that Press Secretary Jay Carney gave at a White House gaggle this morning, when pressed on the issue. After explaining to CNN’s Brianna Keilar that all presidents go to this thing, and that doesn’t mean they all agree with the Fellowship Foundation, he added “Well, I think (President Obama) speaks about the importance that faith plays in his life, that faith plays in the lives of so many millions of Americans. And that’s why he goes.”

With all of that in mind, President Obama fashioned a speech that hewed closely to themes of unity and humility through faith, but which also seemed to suggest an equal share in Godly wisdom for all. He fashioned much of the speech around the dual Bibles that were used in his second inauguration, those once belonging to, respectively, Dr. Martin Luther King and President Abraham Lincoln. “As I prepared to take the sacred oath,” President Obama said, “I thought about these two men, and I thought of how, in times of joy and pain and uncertainty, they turned to their Bibles to seek the wisdom of God’s word — and thought of how, for as long as we’ve been a nation, so many of our leaders, our Presidents, and our preachers, our legislators and our jurists have done the same. Each one faced their own challenges; each one finding in Scripture their own lessons from the Lord.”

The emphasis there is mine, because as the speech went on, President Obama revealed an attitude about divine wisdom similar to that of a kindergarten competition, where everybody gets a God ribbon. Of President Lincoln, he said “we know that he surely found solace in Scripture; that he could acknowledge his own doubts, that he was humbled in the face of the Lord. And that, I think, allowed him to become a better leader. It’s what allowed him in what may be one of the greatest speeches ever written, in his second Inaugural, to describe the Union and the Confederate soldier alike — both reading the same Bible, both prayed to the same God, but ‘the prayers of both could not be answered. That of neither has been answered fully. The Almighty has His own purposes.’

“In Lincoln’s eyes,” President Obama continued, “the power of faith was humbling, allowing us to embrace our limits in knowing God’s will. And as a consequence, he was able to see God in those who vehemently opposed him.”

The theme of God’s unknowable plan, and an openness to the “God” in all of us, and particularly in “those with whom you most vehemently disagree,” was one he would revisit several more times. Later in the speech, President Obama said “In a democracy as big and as diverse as ours, we will encounter every opinion. And our task as citizens — whether we are leaders in government or business or spreading the word — is to spend our days with open hearts and open minds; to seek out the truth that exists in an opposing view and to find the common ground that allows for us as a nation, as a people, to take real and meaningful action. And we have to do that humbly, for no one can know the full and encompassing mind of God.”

“While God may reveal His plan to us in portions,” the President said, in another passage, “the expanse of His plan is for God, and God alone, to understand.  ‘For now we see through a glass, darkly; but then face to face; now I know in part, but then shall I know even as also I am known.’ Until that moment, until we know, and are fully known, all we can do is live our lives in a Godly way and assume that those we deal with every day, including those in an opposing party, they’re groping their way, doing their best, going through the same struggles we’re going through.”

Finally, President Obama said “God has told us how He wishes for us to spend our days. His Commandments are there to be followed. Jesus is there to guide us; the Holy Spirit, to help us. Love the Lord God with all your heart and with all your soul and with all your mind. Love your neighbor as yourself. See in everyone, even in those with whom you disagree most vehemently, the face of God. For we are all His children.”

The political cynic might view this as so much innocuous claptrap, platitudes to soothe his way through a perfunctory chore, designed to minimize offense, and maybe it was, but I think he really believes this. The President is a very smart man, but the premise he sets up here depends on a view of God that differs significantly from my own. Whereas President Obama seems to view God’s will as a mysterious light that all men can walk toward, an unknowable cosmic good that necessarily leaves open the possibility that any man can claim a piece of it, I view God’s will, and God, as a greater wisdom, greater than any one man can know, but knowable in pieces small enough to use.

The President cited Abraham Lincoln’s second inaugural address, and said that “he was able to see God in those who vehemently opposed him,” and while Obama obviously wasn’t suggesting that it was God’s will that Confederate soldiers fight and die defending slavery, the underlying notion, throughout the speech, was that you must always be humble enough to recognize that the other guy might have a point. It’s a notion that has underpinned his presidency, despite his critics’ cries to the contrary, and it has not served him well.

There’s a portion of Lincoln’s address that President Obama quoted which is followed, closely, by a scriptural passage. Right after Lincoln talked about both sides reading the same Bible, and how the “Almighty God has His own purposes,” Lincoln quoted Matthew Chapter 18, Verse 7: “Woe unto the world because of offences! for it must needs be that offences come; but woe to that man by whom the offence cometh!”

Lincoln goes on to explain, essentially, that even though the South was wrong, the North kinda deserved the war, too. “If we shall suppose,” Lincoln said, “that American Slavery is one of those offenses which, in the providence of God, must needs come, but which, having continued through His appointed time, He now wills to remove, and that He gives to both North and South, this terrible war, as the woe due to those by whom the offense came, shall we discern therein any departure from those divine attributes which the believers in a Living God always ascribe to Him?”

Much like President Obama’s appearance at this breakfast, Lincoln was no doubt moved to such generosity by a combination of his true belief in some of what he was saying, and a desire to make peace, and keep peace within the fragile Union. The South was wrong, and if their actions were supernaturally guided, it was not from above, but you can’t make peace with a devil that doesn’t want to be seen as the Devil. Perhaps that’s why Lincoln stopped short of reading verses 8 and 9:

8 Wherefore if thy hand or thy foot offend thee, cut them off, and cast them from thee: it is better for thee to enter into life halt or maimed, rather than having two hands or two feet to be cast into everlasting fire.

9 And if thine eye offend thee, pluck it out, and cast it from thee: it is better for thee to enter into life with one eye, rather than having two eyes to be cast into hell fire.

Jesus didn’t say “If thine eye offend thee, see if thou mayest findeth some sort of middle ground,” he said pluck that sucker out! It’s not always practical to pluck out an eye, or lop off a foot, as President Lincoln learned, but you cannot allow it to fester, as the South did once it was reattached. Put some ointment on it, then, bandage it up real tight, and don’t unwrap it until it stops stinking.

You can’t see “God” in everyone. Yes, it’s important to be humble, and recognize that you may be wrong, and even that the other guy might just have a point, but there comes a time when you must cut way down on the amount of time you’re willing to listen to people who are always wrong. They have no such humility, and given the chance, they will immobilize you with their certainty, and your humility.

God’s will, or the greater wisdom, or whatever you want to call it, is knowable in pieces small enough to use, like getting on the boat God sent you when the flood reached the roof of your house. It won’t help you, however, if you’re busy listening to the neighbor who’s screaming “Boats equal slavery!” at you. God isn’t in everyone.

Here’s video of President Obama’s speech at the National Prayer Breakfast, in two parts, via C-Span: