President Obama Gets Up Close And Personal In New ‘Table’ Ad 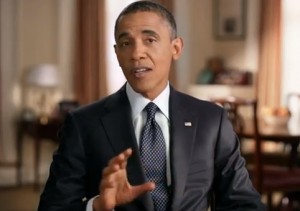 As the 2012 presidential campaign prepares to shed its last booster rocket, and enter its final stage, President Obama has released a new two-minute ad that deploys his candidacy’s most effective weapon against Republican challenger Mitt Romney: the human connection that voters have made with the President, and have not made with the former Massachusetts Governor. While the ad ticks off a four-pronged plan to move the country forward, it is President Obama at your dinner table that leaves the most lasting impression.

The ad, which will air in the swing states of New Hampshire, Virginia, Florida, Ohio, Iowa, Nevada, and Colorado, opens with the President speaking directly to camera, saying “During the last weeks of this campaign, there’ll be debates, speeches, more ads. But if I could sit down with you, in your living room or around the kitchen table…here’s what I’d say.”

After a reminder of where America was when he took office, the President interrupts the nicey-nice tone of the ad ever-so-gently, noting that “Governor Romney believes that with even bigger tax cuts for the wealthy, and fewer regulations on Wall Street, all of us will prosper. In other words, he’d double down on the same trickle down policies that led to the crisis in the first place.”

But mostly, it’s like a two-minute vacation from the Mortal Kombat that has been this campaign thus far, combining a gentle folksy score, some apple-pie cinematography, and most importantly, shots of President Obama into a soothing political foot bath.

The four prongs of his plan, if you can be stirred from the sun-warmed hammock the ad places you in, are:

If President Obama manages to win reelection, it will be, in no small part, due to his ability to connect with voters. Not just in the literal sense, although his campaign’s ground game in these swing states is a crucial advantage, but on a deeper level that this ad hints at very well. Whether we can all agree on everything, or not, we can all picture President Obama at our dinner table. Unfortunately for Mitt Romney, too many voters can only picture Mitt Romney at a dinner table that they weren’t invited to.