President Obama: ‘I Generally Don’t Watch What Is Said About Me On Cable’ 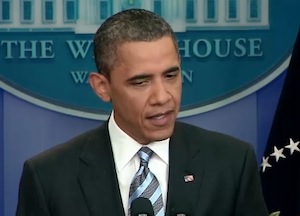 President Obama is holding a press conference this morning which is almost entirely focused on the current negotiations with House Republicans over raising the debt ceiling and the larger issue of deficit spending. The Hill’s Sam Youngman asked the president about some comments made by Senator Mitch McConnell that he views these negotiations through the prism of 2012. Obama responded by ostensibly taking the high road and pointing out that part of his job is having thick skin. He also admitted that he doesn’t watch a lot of what is said about him on cable. Heresy!

Youngman asked specifically if McConnell’s point have view has “poisoned the well” with regards to future negotiations. Obama said the following:

I’m not trying to poke at you guys…I generally don’t watch what is said about me on cable. I generally don’t read what’s said about me even in The Hill, so part of this job is having a thick skin and understanding that a lot of this stuff is not personal. That’s not going to be an impediment…whatever Senator McConnell says about me on the floor of the senate is not going to be an impediment to us getting the deal done. The question’s going to be whether at any given moment are we willing to set politics aside, at least briefly, in order to get something done. I don’t expect politicians to not think about politics. But, every so often there are issues that are urgent, that have to be attended to, and require us to do things that we don’t like to do, that run contrary to our base that gets some constituency that helped elect us agitated because they are looking at it from a narrow prism. We’re supposed to be stepping back and looking at it from the perspective what’s good for the country. And if we are able to remind ourselves of that then there is no reason why we should be able to get things done.

One recalls that when President Bush made similar comments about ignoring both television and printed reports on the political landscape, he was derided as being in a bubble. Is it fair to make the same claim of President Obama?

Watch the sound bit below courtesy of CNN: