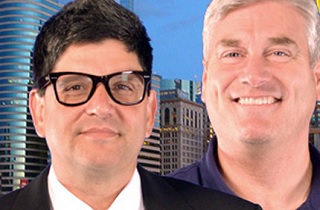 Bob Davis, one half of Minnesota radio duo Davis & Emmer In The Morning, finally said what many gun nuts have probably been thinking for months when he told his audience that “I have something I want to say to the victims of Newtown, or any other shooting,” namely that the gun reforms they’ve been lobbying for “force me to lose my liberty, which is a greater tragedy than your loss.”

He went on to say that he was “sick and tired of seeing these victims trotted out,” and that “I would stand in front of them and tell them, ‘go to hell.'”

“Just because a bad thing happened to you doesn’t mean that you get to put a king in charge of my life,” Davis said. “I’m sorry that you suffered a tragedy, but you know what? Deal with it, and don’t force me to lose my liberty, which is a greater tragedy than your loss.”

Tom Emmer, Davis’ broadcast partner and a former Republican state representative, was slightly more restrained, opining, of the Newtown families, that “they’re being used,” and that “It’s probably one of the worst, ah, political stunts you could do is to use the victims of the tragedy.”

Except, apparently, as punching bags:

The notion that the families of the children and educators killed at Sandy Hook Elementary school are being “used” or “exploited” is a popular one with gun nuts like Davis, who insist that laws we’ve had for decades are suddenly unconstitutional, and who ignore the ruling of the most conservative justice on the Supreme Court. That notion is belied by the consistent, substantive work many of those families have done in order to enact reforms that might make a difference to the next twenty kids who face this kind of horror. It’s also offensive, and cowardly. Davis can bellow all he wants from behind his mic, but you can bet he’d shrivel up like a salted slug if he had to stand in front of Nicole Hockley, or Neil Heslin, or David Wheeler.

Davis wouldn’t wilt under the glare of their moral authority, though, or out of any sense of shame. He would dissolve from his inability to engage any of the simple, substantive questions these parents have asked, and continue to ask. Why would you not perform a criminal and mental health background check on every gun sale? Why does any civilian need more than 10 rounds in a magazine? Why is Davis’ right to completely unrestricted access to firearms more important than Benjamin Wheeler‘s right to live?

On Monday morning, Davis did not apologize, but he did grudgingly acknowledge the Newtown families’ right to exercise their First Amendment rights on this earthly plane.

Instead of dismissing them, Davis ought to try listening to these families. He never says so, but I’d be willing to bet that Davis would give a Hell-pass to pro-gun Newtown parent Mark Mattioli, and that’s how it should be. Whether you agree with them or not, all of these parents have earned a right to be heard, and the very least you can do is shut up and listen. If that’s not enough for Bob Davis, then the next-to-least thing he can do is to engage them respectfully, on the substance, instead of dismissing them.